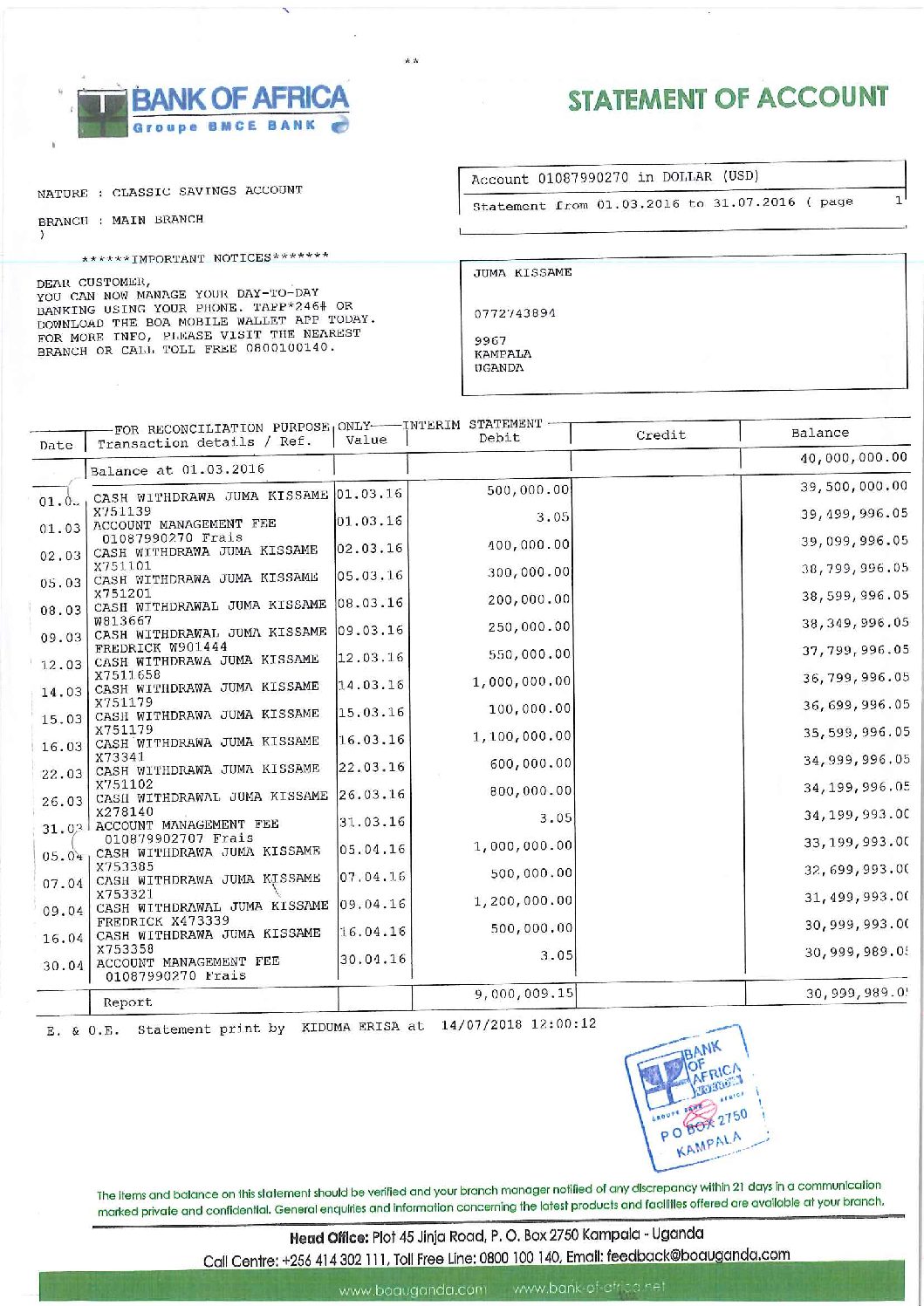 As the country comes to times with the revelation in the Auditor General’s report over the manner in which commercial banks where sold by Bank of Uganda, it has emerged that a top boss at Dfcu bank has $40 million on his account as show by the statement of transaction.

Dfcu ‘bought’ Crane Bank from BoU in a process that Auditor General says it wasn’t transparent given that Dfcu was the valuer turned purchaser of the same bank.

According to a leaked statement that Eagle Online has seen and which has been circulated on social media indicate the man could be the richest managing director with over $40 having been transacted on his account which rises suspicion that this could be money laundering.

Dfcu is said to have negociated with authorities at BoU to buy Crane Bank Limited at Shs200 billion but as per AG report, it is only Shs90 billion that has so far been paid to the central bank.
The leakage of this statement could worsen the already tense situation given that shareholders blocked Mr Kisaame from resigning his post. Mr. Kisaame had tendered in his resignation after the stormy meeting in South Africa.

Earlier Eagle Online reported that Dfcu was lured by top bosses at BoU to takeover Crane Bank is in the storm that business analyst can best describe as trying moment for the 3rd largest bank. Dfcu became 3rd after it took over Crane bank thereby growing its customer base and an increase on asserts.


Insider sources indicate that there two camps created among the shareholders, one led by board chairman Elly Karuhanga insisting on current MD Juma Kisaame and the other camp-mainly led by 58.71 majority shareholder Arise BV and Britain’s CDC Group in favouring William Ssekabembe who they think can turn around the fortunes of the bank whose current problems seem to have emerged from the controversial purchase of Crane Bank in January 2017.

It is also said that the transaction of between Dfcu and BoU surfaced and the allegation at hand were that about $3 million of the $8 million deposited by shareholders of Crane bank to BoU was instead shared between top individuals at Dfcu and leading lawyers and only declared $5 million. This website has confirmed with top BoU leadership on the issue of $3 million as having taken by the lawyers and top gurus at Dfcu. It is said that they further questioned why Dfcu is facing bad publicity over the Crane bank takeover as they wondered whether certain information as regards to the takeover was hidden. They concerns are further worsened by the fact that the bank is having liquidity problems.

In trying to curtail the issue of bad publicity, the bank is said to have rushed in drafting warning letters to several online publications with a view of stopping them from further disseminating news on the matter.

Nevertheless, as the meeting got stormy, the shareholders started blaming each other of sabotage and backstabbing each other. And it is from this meeting that MD Juma Kisaame is said to have offered to resign. Conversely, the board has put his resignation on halt in order to reexamine the mess.