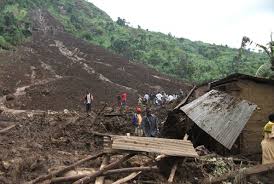 Two market centres on the slopes of Mt. Elgon were competently decimated when river Suume in Bukalasi subcountry in the landslide prone District of Bududa burst its banks carrying whatever it found in its way into the larger River Manafa, killing at least 31 residents.

According to Martin Owor, Commissioner for Disaster Preparedness and Management, about 31 bodies were confirmed dead by yesterday, but many more are feared dead. Recovery efforts had been restricted due limited accessibility and navigation in the area as the river ripped off all brigades linking the remote villages to the rest of the district and creating a huge sludge rift separating either sides if the river.

“Most of the people were caught at the trading centre, the landslide pushed huge boulders into a river which burst its banks and the water swept away the people,” Owor said.

Others were those whose homes were in close vicinity to the river banks or those who were found on the roads in the way of the river where it passed including boda boda riders who were braving the afternoon rain. Two of them lost their bikes one was carried away while the third one lost both of the passengers but survived with injuries from the rolling rocks.

The catastrophe was a surprise to the residents who were going about with their usual chores un aware of the heavy rains within the Mt. Elgon Nation Park that had triggered heavy flooding and mudslides that gained momentum carrying trees and rocks as rolled down the mountain slopes.

“There are people who were displaced and they need shelter, food and all other support and we’re moving that relief to the area,” he said.

The disaster occurred just a few kilomenters from the 2010 disaster of the next village of Nametsi in which over 30 homesteads were completely buried and unknown number of lives lost. Similar disasters are common in this area but residents have taken low response to Government efforts to leave the mountainous areas.