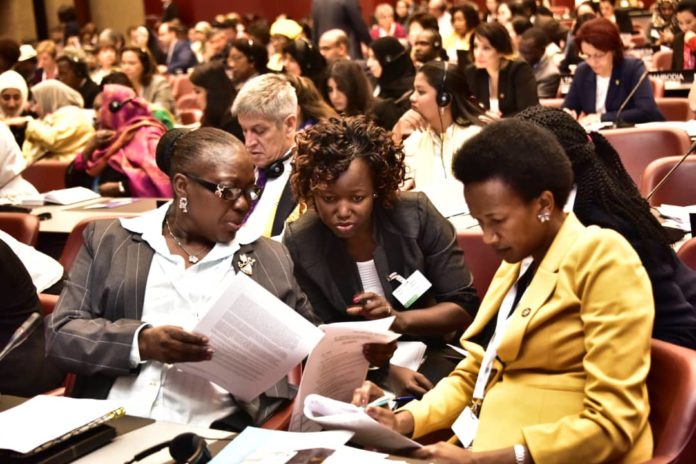 The Speaker of Parliament, Rebecca Kadaga, has implored legislators from around the world to enact laws that protect rights of migrant women.

Kadaga also called on parliamentarians to play a critical role in policy formulation and adherence to international laws pertaining to human rights and freedoms.
“We can use our powers to ensure meaningful, balanced and informed response to migration. Management of human mobility at both international and local levels is more effective when parliaments cooperate with each other through regional and international forums,” Kadaga said.

The Speaker made the call during the 28th Session of the Forum of Women Parliamentarians of the Inter-Parliamentary Union (IPU). The meeting is part of the 139th Assembly of the IPU, which is being held in Geneva, Switzerland.
During the discussion on the theme “Migrant women: inclusion, work and rights in host countries”, Kadaga informed the delegates that Uganda hosts many refugees and it has ratified the International Convention on the Protection of the Rights of All Migrant Workers and Members of Their Families.

“We should all honor our responsibilities as per ratification of these conventions. Unfortunately, as of September 2017, only 37 member states had ratified the five UN legal instruments concerning international migration. Some states have not even ratified a single convention,” Kadaga added.
She also appealed to migrant host countries to respect and protect the rights of women to work and also recognize that migration is a way of improving their rights and opportunities for work within families.

Kadaga called on the MPs to appeal to their respective governments to offer justice to women under migration situations, “For they go through a lot of domestic violence but fear to report to the authorities because of their citizen status in those countries.”