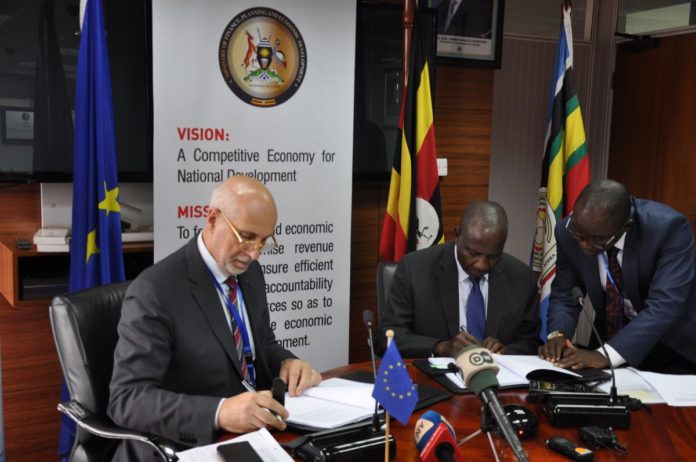 The government of Uganda through the Ministry of Finance Planning and Economic Planning have signed a financing agreement where the European Union (EU) is to provide a grant of more than Shs90 billion for the rehabilitation of the Tororo-Gulu railway to support the Development Initiative for Northern Uganda (DINU).

The agreement signed at the Ministry of Finance headquarters in Kampala will also see the Ugandan government inject in the rehabilitation project Shs57 billion.

The money will fund the physical rehabilitation of the line, supervision of the works, capacity building of the Uganda Railway Corporation (URC) and the compensation of about 4000 people for loss of mainly their crops and a few developments on the land.

Finance Minister Kasaija said the rehabilitation of the Tororo-Gulu railway is part of government’s efforts to modernize the railway system in the country especially after it terminated the operations of the Rift Valley Railways for failure to meet concessional terms.

“Due to the continued failure by RVR to meet their obligations under the concession, Government decided to terminate the Rift Valley Railways (RVR) freight concession for Uganda Railways in 2017. Government via Uganda Railways Corporation (URC) took over the operations of Uganda Railways and all assets of the railway formerly managed by RVR such as the permanent way, locomotives, workshops … reverted back to URC,” he said.

Minister Kasaija said the project to begin by year end is part of a deliberate move to rejuvenate the railways subsector and with the objective to relieve the heavy burden on the country’s road infrastructure.


“The Tororo- Gulu Metre Gauge Rehabilitation Project is very important for trade facilitation for Uganda as it will open up the northern parts of Uganda and parts of Congo and South Sudan in terms of freight,” he said, adding that the project is also linked to the bigger DINU programme and the Gulu Inland Container Depot, a logistics hub consisting of intermodal road-rail transhipment platform and distribution facilities, also funded by the EU.

He said that because of its proximity to the Albertine region, the railway project will benefit from transportation of equipment and inputs for the construction and operations of the oilfields given the bulky nature of oil equipment, which he said normally exceeds the standard size for road transport and therefore require special transport arrangements, making them natural customers for the railway.

The project shall be implemented by Uganda Railways Corporation under the supervision of Ministry of Works and Transport.

According to Amb. PACIFIC: “This project is part of EU’s efforts to help government develop northern Uganda. It also complements well the EU humanitarian assistance to refugees and support to host communities provided under the EU Emergency Trust Fund.”

He said the rehabilitation of the railway and the Gulu Logistic Hub will have a major impact on the facilitation of trade by reducing import and export transportation costs. The two projects, he said will be a key import/export platform not just for northern Uganda but also for South Sudan and eastern Democratic Republic of Congo (DRC.)

The official said: “The project will have a spill-over impact on private sector growth and on investment promotion. It will also add value to the key value chains of Northern Uganda including agriculture products, cement, oil and gas, mining as well as industrial products in general.”

The Tororo-Gulu railway line used to be a pivotal economic artery along the East African Northern Corridor linking the port of Mombasa and Eastern Uganda to Northern Uganda, as well as the neighbouring countries of South Sudan and Democratic Republic of Congo. The line has been out of service since 1993 notably due to actions of war by the Lord’s Resistance Army and the unfair competition of overloaded trucks.

The 375km old metre gauge railway line from Tororo through the districts of Mbale, Kumi, Soroti, Lira and Gulu.