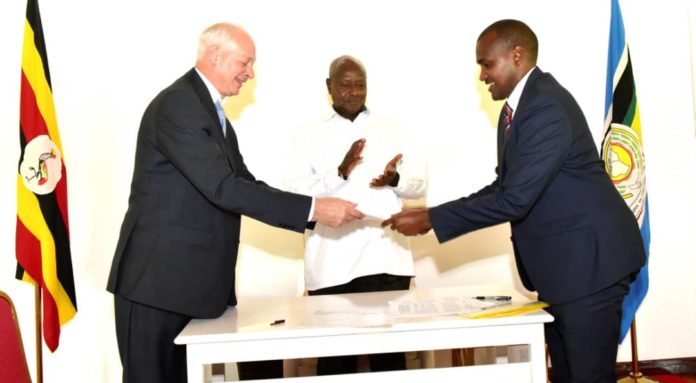 Uganda has signed an agreement with Russia to collaborate in the field of Information Communication Technology.

The two countries will cooperate in parcel transportation, radio telecommunications, conduct joint research and trainiing and support each other in enforcing open government data and openness of state bodies, network security, issuance of electronic IDs of citizens and information systems in healthcare and ICT regulation.

The signing ceremony saw ICT Minister Frank Tumwebaze committing on Uganda’s behalf and Alexey Volin, Russia’s Deputy Minister for Digital Development and Mass Communication, ratified for his country.
Mr Volin, who doubles as the co-chair of the Russian-Uganda Inter-Governmental Commission on Economic, Technical and Scientific Cooperation, delivered a condolence message from President Vladimir Putin to President Museveni following the Bududa landslides tragedy. The tragedy led to death of over 40 people dead.

Mr Volin said Russia through its embassy had set up a one-stop centre where Russian companies seeking to invest in Uganda would be supported.
He lauded Kampala Capital City Authority for agreeing to name a street after Yuri Gagarin, the first person to fly in space. His flight in April 1961, aboard the Vostok spacecraft, lasted 108 minutes.

Museveni in in turn encouraged Russia to invest in Uganda saying that government will support them in terms of land and tax waivers for large-scale investments.
In the meeting, International Affairs State Minister Okello Oryem, revealed that the joint ministers’ commission had set up a time frame to ensure all agreements between Russia and Uganda are implemented.