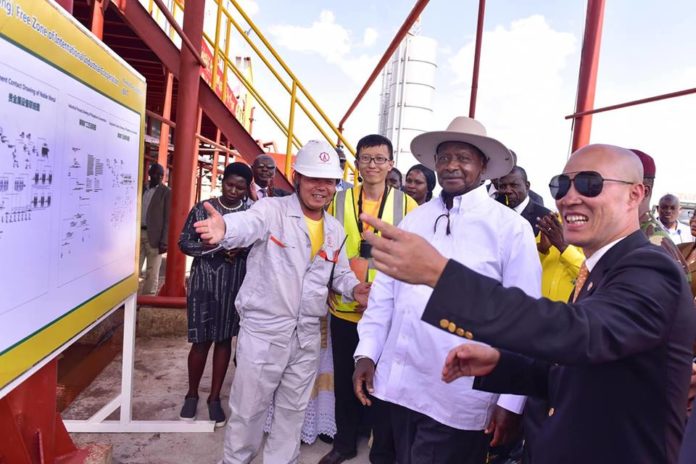 President Yoweri Museveni has commissioned the First Phase of Tororo Free Zone Industrial Park and the Sukulu Project in Tororo district on the border with Kenya and appreciated Chinese investors for the work well done.

The US$620 million Sukulu project is set to produce organic fertilizers and is expected to employ over 2500 people.

The fertilizer production plant will begin with producing 50,000 tons of purely organic fertilizers on the local market and will grow to 100,000 tons as demand grows beyond borders across the region.

This fertilizer will improve water retention of soils besides the soil’s ability to absorb nutrients.

According to CEO Dongsong Energy Group Uganda Ltd, Jane Guo, the second phase of the project will employ about 3000 to 4000 local workers. It will comprise of the steel, glass, ferroalloy and tin smelting plant, Shea processing factory, humid acid fertilizer, cement fiberboard plant and wood factory will be completed and begin operation at the end of July 2019.

He lauded Museveni and h government officials that played “a major role to ensure this project is a success from back when it was in the exploration phase to now when production is going to kick off.”

The third phase to include the phosphorus chemical plant, iron foundry, and medical glove factory will be completed and begin operation at the end of 2020.

Museveni said that the project in Tororo will make Uganda competitive especially when the planned building of the Standard Gauge Railway (SGR) is completed.

The president also used the function to warn of the rampant corruption in the country. Museveni said public officials who ask for bribes from investors discourage investment in such projects.