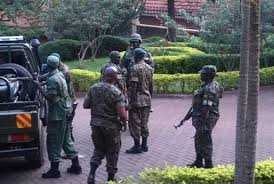 Some officers of the Uganda Peoples Defence Force (UPDF) will be deployed soon as security guards for the businesses of Chinese investors that have of recent suffered a wave of robberies, according to Brig. Richard Karemire, the army spokesperson.

Brig. Karemire said soldiers would start offering security to Chinese investors in response to a recent series of attacks that have fueled fear in the business community.

Karemire said Chinese investors were being targeted because of their inclination on keeping large huge amounts of cash within their factories.

“Security forces, the military inclusive, will provide security…We hold them dearly because of the employment opportunities they offer,” he said.

In recent months a number of attacks on Chinese-owned businesses has taken place, mostly in Kampala and Wakiso, with robbers grabbing cash and other valuables.

On Wednesday, a local daily quoted an official from an association of Chinese-owned businesses in Uganda as saying some business owners were considering leaving the country because of insecurity.

Uganda hosts a large number of Asian investors and workers, a sizeable portion of them from China, and their numbers has been growing in as China consolidates its footprint in Africa.

Some of Chinese investors have been criticized by the local businessmen for engaging in petty trade and light manufacturing, which local think are reserved for them.

However some Chinese companies have been contracted to embark on huge public infrastructure works in Uganda supported by the Chinese loans to the country. They include hydropower dams, roads and others.

In recent years crime, such as murder, robberies and kidnappings for ransom, has been growing in Uganda and President Yoweri Museveni has said security personnel may be colluding with criminals.