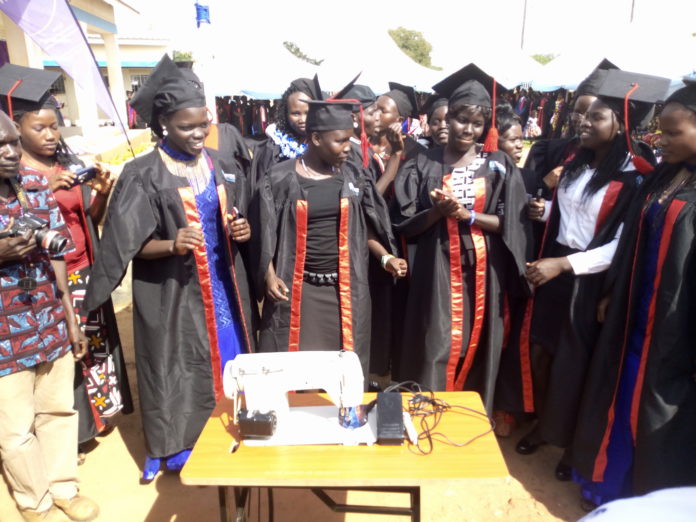 These former abductees By the Lord Resistance Army LRA war in the region confessed that most of them were hopeless before after returning from the bush and hardly did not know that their future can be brightened again until they started hearing about the centre on Radio and immediately opted to join despite being desperate and hopeless.

During the 8th graduation ceremony at the centre, these 15 survivors were excited upon seeing them also making another tremendous steps in lives with great hope that the decision they took will positively change their lives and thinking.

Piloya Concy, 25 years old one of the female made a revelation that she was abducted at the age of nine from Pabo village in Amuru District and by then she was in Primary Four ,she managed to come back from captivity after one year and continue with her study up to Ordinary Level but later decided to go for vocational skill training due lack of fees since both parents were unable to push her for further studies in other institutions.

Concy did training in tailoring and garment cutting emerged the best students in the school and was awarded with an electronic sewing machine.She is hoping that the knowledge she attained and plus the equipment will help her in sustainability of her business.

Patrick Oola Lumumba the chairman LC3 Bardege Division in Gulu Municipality said in most cases parents from north were spending millions of shillings sending their children to Kampala for better education but it’s now time the parents should realise and recognize the importance of different institutions in the district in order to cut cost and burdens since they have every equipment and facilities needed to instill knowledge in their children.

He added that the grandaunts should be empowered individually by opening up their own workshops and restaurants in order to avoid exploitation from other business owners around town.

Betty Betty, director of the school revealed that she started the school because she was also affected by the war and as a returnee after studying tailoring course for three years she came back and started working with other organizations to train other returnees but later lobbied for his own training centre in 2005 were the centre has now positively impacted many lives of the returnees and other community in the region and most of them are living on their own.

Gulu War Affected Training Center has so far passed out over 400 students in hands skill disciplines including former LRA abductees and other community at large .