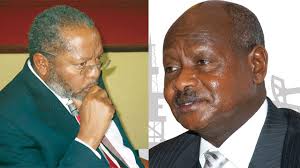 President Yoweri Museveni has revealed that there is corruption in well remunerated government institutions of Uganda Revenue Authority and Bank of Uganda.

Speaking during the anti-corruption dialogue held at Imperial Royal Hotel, Museveni said there is still a lot of corruption in spite of all these efforts made to man it down.

“But remuneration can’t replace integrity because some of the areas where there is a problem, people are well remunerated URA, they get very good salaries and so why would you have corrupt people there. Bank of Uganda,there is corruption there and so there is Kawukumi (Bean weevils), Kawukumi, there is muwembe and gradually Kawukumi has come in there now and so remuneration is not a cure but patriotism first ” President Museveni said.

During the State of the Nation Address Museveni instituted a parallel team led by former Secretary General of Uganda National Teachers Union (UNATU) James Tweheyo, former Mbarara Resident District Commissioner Ms. Martha Asiimwe and sister Akiror to manning corruption desk in his office. The team was to directly report cases to him.

Museveni said that during bush war, their effort was that patriotism will be reinforced by the popularly elected leaders, as legislations and the institutions look after them, “The whole population is fed up of corrupt people because they know them, but with patriotism, corruption is defeatable,” he added.
Eagle Online reported that yesterday during cabinet meeting, Mr Museveni is reported to have rejected pleas by Finance Minister Matia Kasaijja to have the ongoing inquiry in parliament halted. Kasajia’s request was supported by government Chief Whip, Ruth Nankabirwa.

However, as the debate was gaining momentum, the president chipped and said “I advised those people (BoU) against closing Crane Bank, I even went on to suggest that we carry out a silent investigation and I went ahead to contact Abdu Katuntu who agreed with my suggestion but they refused and so let parliament do its work and let them face music” the president is quoted to have said.