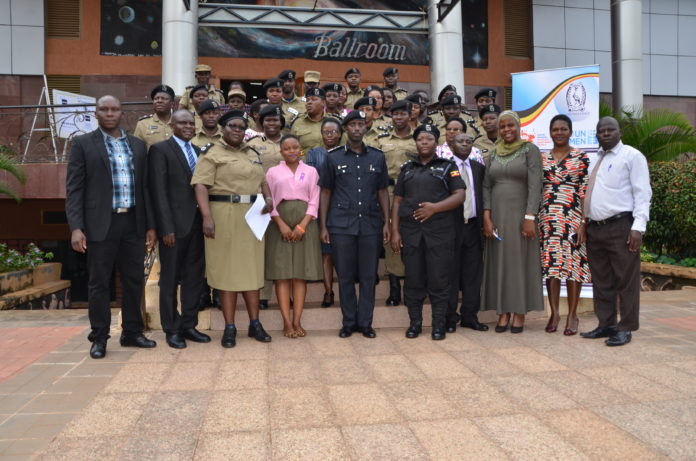 The Inspector General of Police (IGP), JM Okoth Ochola has urged Police Officers to observe human rights and fight discrimination of women in the course of implementing their duties.

In a speech read for him by the Deputy Inspector General of Police Brig. Sabiiti Mzeei, IGP said the fight against discrimination and by extension violence against women is a national priority with long standing commitment and mechanism to implement the supporting policy and legal framework.

Under the theme ‘Promoting gender equality at workplace in the Uganda Police Force’, the function that was organised by the department of Women Affairs in police, was held at Sliver Spring Hotel in the commemoration of 16 days of activism 2018.

“As an institution, police has paid particular attention in the development strategy which explains the early integration of women into police for over sixty years ago, the institution has invested in training program for officers, enhanced selection criteria and developing human resource especially for women who now play an important role in the implementation of the strategic Policy plan of the institution,” he said.

“We deeply stress the highest commitment of the institution for the promotion of human right as well as the role of female police officers, by recognizing the principal of equally between men and women as a principal of constitutional value entitled in the constitutive Act of our Plan-African organization, ” he said.

During this commemoration, the department is also committed itself to addressing gender based violence and ensure effective implementation, breaking silence and increase awareness on the mandate of the department.

The Women Affairs department was formed in 2014 with the objective of building a strong force of women officers dedicated to the transformation of the Uganda Police Force, through the elimination of gender imbalances and the improvement of service delivery.