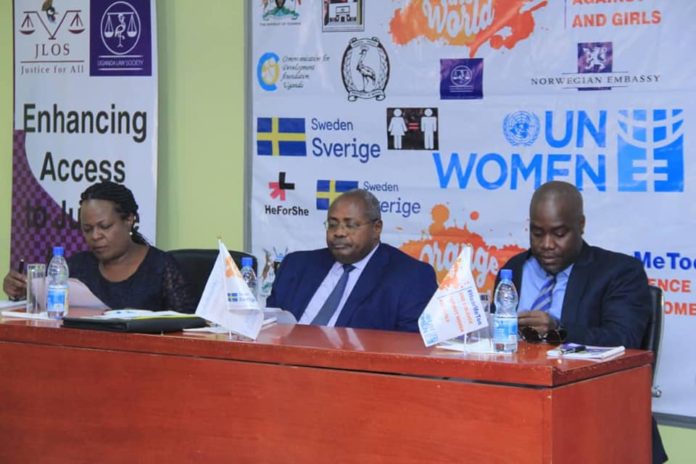 The Principal Judge, Yorokamu Bamwine, has revealed that Uganda is making good progress in the fight against Gender Based Violence (GBV).

Remarking at the second National Symposium on Justice for Women and Girls at Hotel Africana, Bamwine said Uganda has laws and clear strategies however, the challenge is in implementation of the legal framework to create a conducive environment for women and girls to access justice more effectively and efficiently.

“There are poor case handling methods, including exhibit mishandling, poor statement recording and other outdated evidence admission requirements such as trials within Trials before evidence of a child of tender years and or confession statements can be made part of the record,” he said at Hotel Africana

He noted with concern that there are delays in investigation, prosecution and adjudication of Sexual and Gender Based Violence (SGBV) crimes.

“In spite of the setbacks, the Judiciary is in the process of setting up a specialized GBV Court. Courts are effective in that Judiciary staff have specialized skills and the use of innovative ways to expedite trials,” he said.

Bamwine said there is a need to strengthen stakeholder engagement through offering support to District Chain-linked Committees saying they have a big role to play in the fight against GBV through mobilization of resources, ideas and even sensitization of the populace.

The President Uganda Law Society (ULS), Simon Peter Kinobe, called upon the State to enhance its responsibility in protecting the rights of women and the girl child, since statistics in Uganda show that the rate of violence is increasing by 16.7 per cent.

He pledged that ULS continues with advocacy to ensure women and girls have access to justice.