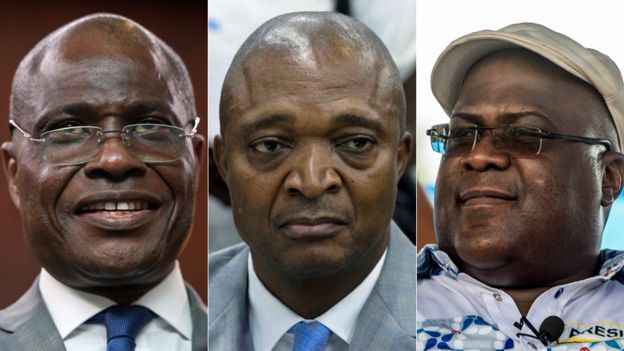 People in the Democratic Republic of Congo are voting for a new president in an election delayed for more than two years.

Close to 40m people are eligible to vote for a replacement for President Joseph Kabila – in power since 2001.
But the run-up has been hit by violence and controversy over the decision to exclude almost 1.3m people from voting.
On Saturday, rival candidates also failed to agree on a statement aimed at reducing tension before the poll.

Voting began at 05:00 (04:00 GMT) and ends at 17:00.
What’s the context for these elections?
If everything passes without incident, this will be the first peaceful transition in DR Congo since it gained independence from Belgium in 1960.
The current president took over from his assassinated father Laurent in 2001, but he is barred from running for another term under the constitution.

 Five things to know about DRC
He was supposed to step down two years ago, but the election was postponed after the electoral commission said it needed more time to register voters.
The decision triggered violent clashes, as the opposition accused Mr Kabila of trying to cling on to power.
Then last week, the election was delayed again, for seven days, because of problems deploying voting materials to polling sites.
This all came after thousands of electronic voting machines – being used for the first time – were destroyed in a fire in the capital, Kinshasa.

There are 21 candidates, but three frontrunners:
 Emmanuel Ramazani Shadary, a former interior minister and Kabila loyalist, who was hit by European Union sanctions for his role in the violent suppression of opposition protests in 2017;
 Martin Fayulu, a former oil executive who has promised “a dignified and prosperous Congo”, but who poor Congolese feel may not advance their cause;
 Felix Tshisekedi Tshilombo, the son of a late veteran opposition leader who has promised to make the fight against poverty his priority.

EU observers not invited
The three leading candidates and electoral officials met in a Kinshasa hotel on Saturday to, as Mr Fayulu said, “sign an agreement which ensures we will all behave correctly during and after the electoral process”.

But in the end, he and Mr Tshisekedi wanted amendments and refused to sign the text.
This week, voting in three districts was postponed until March, with the electoral commission blaming insecurity and an Ebola virus outbreak.
About 1.2m people will not be able to vote on Sunday as a result.
The decision in effect cancelled their votes, as the new president is due to be sworn in by mid-January regardless.
A crowd attacked an Ebola clinic in the east of the country after the announcement.

Regional observers will be keeping a close eye on voting, but European and American observers, who had concluded previous elections in the country had lacked credibility, have not been invited.
What is the significance of DR Congo?

The vast central African state is rich in mineral resources and is the world’s leading producer of cobalt, used to power mobile phones and electric cars.
However, it has high levels of poverty, bad infrastructure, and a political and business elite accused of enriching itself at the expense of the poor.

It has also been at the centre of what some observers call “Africa’s world war”, between 1997 and 2003.
The conflict, which dragged in regional states, claimed up to six million lives, either as a direct result of fighting or because of disease and malnutrition.