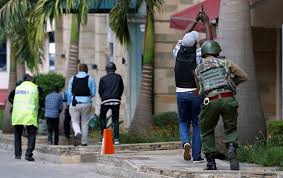 Somali Islamist militant group al Shabaab have claimed responsibility for an attack in the Kenya capital of Nairobi, their spokesman told Reuters.

“We are behind the attack in Nairobi. The operation is going on. We shall give details later,” said Abdiasis Abu Musab, al Shabaab’s military operations spokesman.

Kenya has often been targeted by al Shabaab, who killed dozens of people in a shopping center in 2013 and nearly 150 students at a university in 2015.

A woman shot in the leg was carried out and three men emerged covered in blood. Some office workers climbed out of windows. Many told Reuters that they had had to leave colleagues behind, still huddled under their desks.