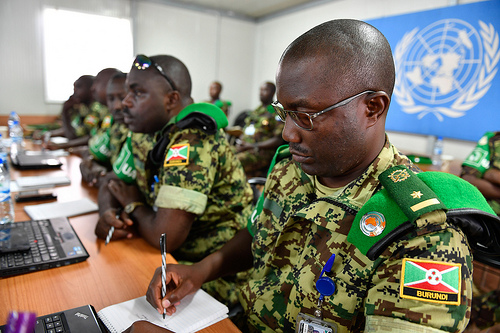 Military officers deployed to Somalia have been asked to observe discipline and respect the local culture to help strengthen relations between the African Union Mission in Somalia (AMISOM) staff and the civilian population.

The plea was made at the end of a four-day induction course for military staff officers from Troop Contributing Countries held in the capital Mogadishu, today.

“You need to apply the knowledge that you have acquired during the induction course judiciously and effectively in order to complement the functions of the Mission headquarters and help stabilize Somalia,” AMISOM Chief CIMIC Officer, Col. Francis Kangwanda told the participants.

Col. Kangwanda said the aim of the course was to enable staff officers fully understand the environment they will be working in during their one-year tour of duty.

Major Gavin Kasyoka, a military officer from Kenya, said the course has given him an insight on the operations of the AU Mission, Somalia’s cultural norms and the international laws that are crucial in peacekeeping.

“The course has given us a good understanding of our work environment and also what we need to do to help AMISOM fulfil its mandate,” Major Kasyoka added.

His sentiments were supported by Warrant Officer, Sahr Philib Soukenah, from Sierra Leone, who underscored the importance of induction training for officers deployed in conflict environments in the continent.

“I have learnt that it is important to understand the culture of Somalia and the way AMISOM operates. I thank the organizers of the training,” Officer Soukenah said.

The officers were taken through the AMISOM code of conduct and standard operating procedures, Concept of Operations (CONOPS), rules of engagement, prevention of sexual abuse and exploitation, the law of armed conflict and International Humanitarian Law and Somali culture among others.