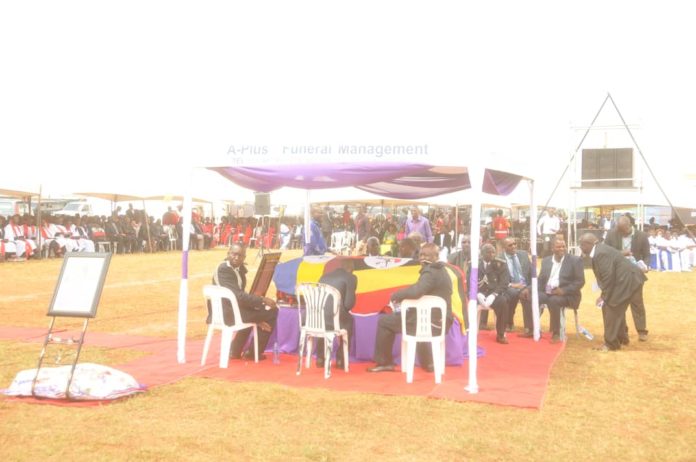 Hundreds of people have gathered at Kyabazinga Stadium in Bugembe, Jinja district to attend a funeral service to send-off the late Bishop Emeritus, Cyprian Kikunhi Bamwoze – pioneer Bishop of the Anglican Diocese of Busoga.

The late Bamwoze was buried today at Bugembe Cathedral next to his late wife, Noame Bamwoze who was buried  here last year.

The speaker of parliament, Rebecca Kadaga represented president Museveni as chief mourner and the Most Rev. Stanley Ntagali, the archbishop 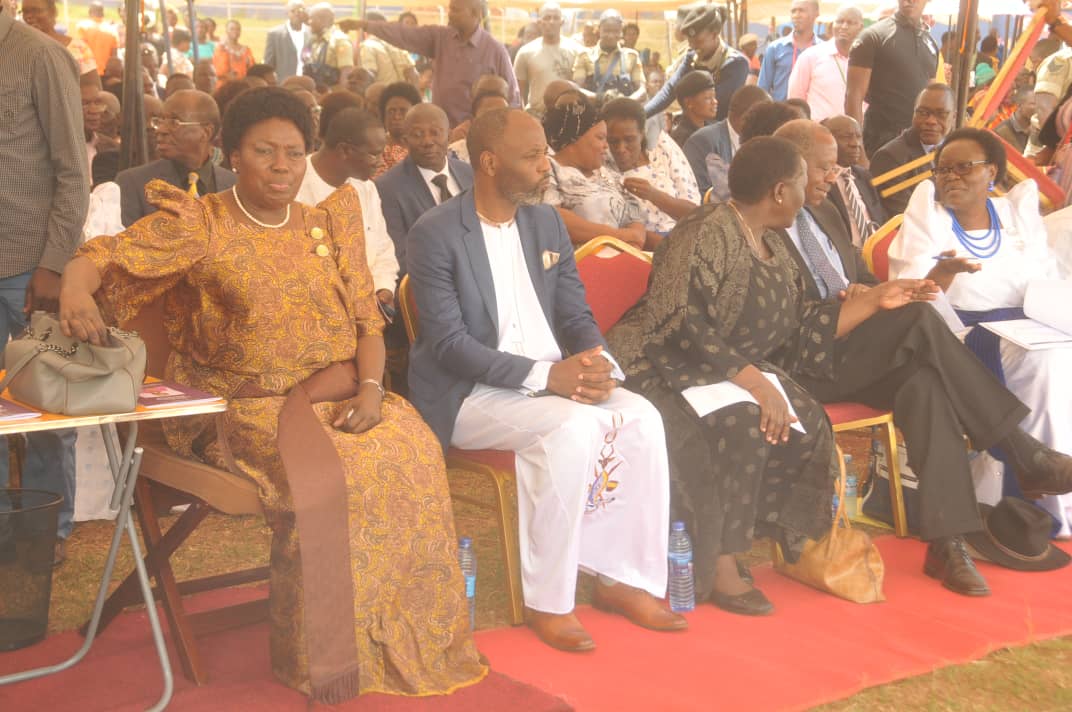 Of the The main Church of Uganda was the main celebrant at the funeral service.

The archbishop was accompanied by service leaders who include Wilberforce Kityo Luwalira the Bishop of Namirembe and Paul Naimanhye the Bishop of Busoga Diocese, and assisted by several other Bishops and Clergy.

In her speech, Kadaga hailed the fallen Bishop for the work he did for Busoga. 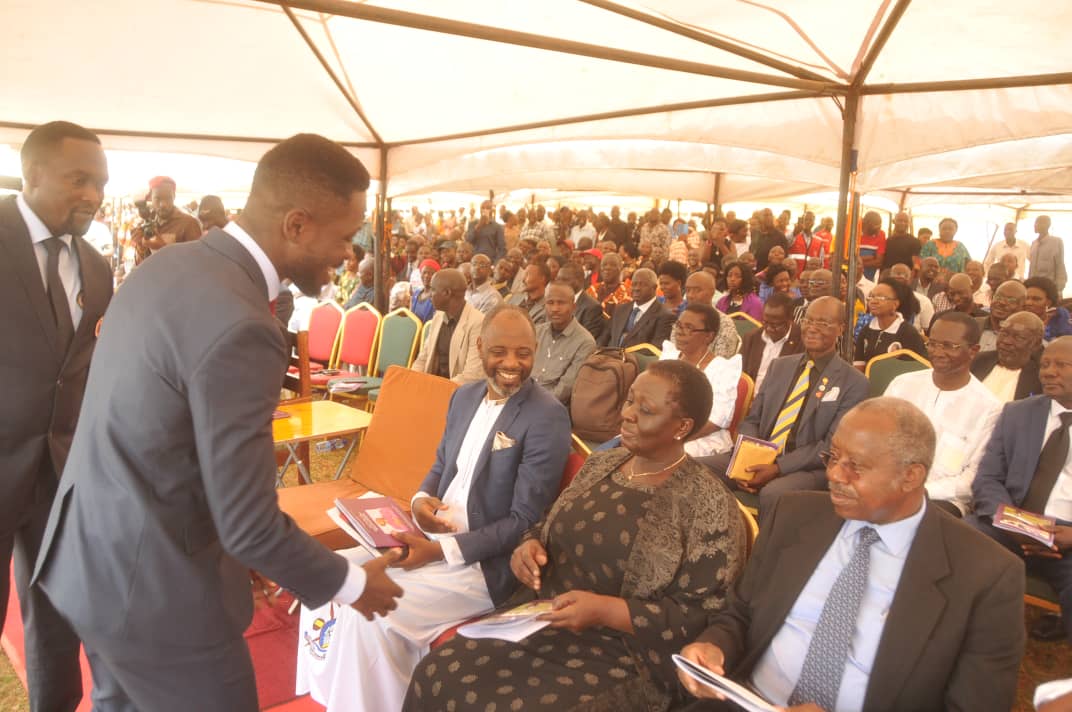 Earlier, Kazibwe had urged orphans and relatives of fallen mothers to always allow the widowers to remarry such that they would live longer.

“When his (Bamwoze’s) first wife died we advised him to get another wife who would look after him. And it was until recently when his second wife died that his life started deteriorating. Therefore children, stop stopping your fathers from remarrying when your mothers die,” said Kazibwe.

Many speakers hailed Bamwoze for his love and advise he always rendered to the people of Busoga and development projects he initiated in Busoga and Uganda at large.

Ntagali described Bamwoze as a great man who worked tirelessly for the growth of the Church in Busoga.

Bamwoze has been an adviser to married couples who also bonded many broken marriages.

He has been described as a selfless, candid, ingenious, developmental and loving man of God who touched the lives of infants, children, young people and adults in and beyond Busoga.

He was born in Nakimegere-Naminage on May 15, 1934. He is succeeded by six children.

Cyprian Kikunyi Ngobi Bamwoze was the first bishop of Busoga. He presided over the diocese for 26 years, the last seven of which were turbulent.

Bamwoze, who was born on May 15, 1934, in Nakimegere Village, Kitayundhwa Sub-county in Kamuli District, to Birusaani Munhanhanfu and Budestiana Mukoda, was consecrated bishop in 1973 and it was not by accident. His father, a peasant farmer, had always wanted his son to become a priest.

He went to Naminage Primary School in 1944 and proceeded to Kamuli Junior School before joining Busoga College Mwiri in 1955. Bearing in mind the fact that his father had always wanted him to become a priest, he in 1960 enrolled for a religious education course in Mukono before going on to study theology in the United Kingdom. He was ordained a priest in 1963.

Impressed by his brilliance, the then Archbishop of Uganda, Prof King, had him enroll for a Bachelors’ Degree in Religious Education and Philosophy at Makerere University. He graduated in 1967 and was posted to St James Church in Jinja from where he rose to become Busoga’s pioneer bishop.

Bamwoze was widowed twice. His first wife and mother of his six children, Beatrice, died in 1986. In 1988, he married Naomi but he was once again left widowed on June 12, 2016 when Naomi succumbed to diabetes and high blood pressure.

That marked the beginning of the deterioration of his health. Early in February 2017, he was admitted to Nakasero Hospital complaining of stomach complications. In August, it was established that he had leukemia.

Bamwoze believed that Christianity was more than spiritual welfare of his people.

“He believed that Christianity was also about the social and economic welfare of the believers. That is what informed his involvement in activities aimed at uplifting the living standards of Christians,” says Patrick Waiswa.

Under Bamwoze’s stewardship, the diocese set up the Family Life Education Programme (FLEP), which provides for treatment for, among others, HIV/Aids, Tuberculosis and reproductive health services. He was instrumental in the formation of Busoga Trust, an NGO that works to improve water and sanitation in rural communities.

In 1993, the Board of Governors of Busoga College Mwiri, which he headed at the time, passed a resolution to establish a university. In May 1995, the diocese then offered 100 acres of land in Iganga, the seat of Busoga University today.

What caused the rebellion in the diocese and why it remained for seven years remains a mystery. It was believed that some members of the House of Bishops sparked it off because they viewed him as a threat to their own ambitions to succeed the late Yona Okoth as archbishop.

It is, however, also likely that he was always misunderstood by his flock. His messages were often difficult to decipher. The homilies were always punctuated with sayings and proverbs. Even when he would try to speak plainly, the speech would be so pregnant with meaning. A case in point was the 1999 handover to late Archbishop Mpalanyi Nkoyooyo, who was caretaker of the diocese until Bishop Michael Kyomya was enthroned a year later.

“You see who I am handing over your diocese to. Look at him critically,” he said.

His message was that had they not allowed themselves to be used to fight a war that they never understood, he would have been directly handing over the crozier to his successor.

Bamwoze retired into farming. By April 2008, he was doing so well in fish farming that President Museveni, who was in Busoga to popularise the “wealth for all” programme, lavished praise on Bamwoze and promised to boost his work with Shs600 million. Years later, when the delivery boys turned up, it was with Shs400 million.

“Take it back until President Museveni gets all the Shs600 million that he promised me. After all, I never asked for it,” he told them.

The delivery drove out but were back in a jiffy. They had somehow found the other Shs200 million.

He belonged to the Uganda People’s Congress (UPC) and was one of the architects of Jinja, Iganga, Kamuli (JIK), a body headed by the late former minister of Internal Affairs, Dr Luwuriza Kirunda. JIK brought together MPs and UPC constituency chairpersons to plan for the region’s development.

There were efforts to convert him to NRM. He led prayers during Mr Museveni’s last rally in Kamuli ahead of the 1996 general elections and has been very close to all NRM big guns in Kamuli, including Speaker of Parliament Rebecca Kadaga. It was, therefore, a surprise when he was named chairperson of Mr Aggrey Awori’s national campaign taskforce ahead of the 2001 general elections.

On the other hand, Bamwoze, a man of modest size, did not go down with the botched Awori campaign. He remained standing tall like a giant sphinx.

It was not until he was weakened by chemotherapy that he scaled down Christian ministry. Otherwise, his homes in Nakakabala and Bugembe were always teeming with Christians in need of counselling.

Despite the fact that the diocese has since been split into two, each with its own bishop, many Christians from either of the two have approached him to preside over their functions.