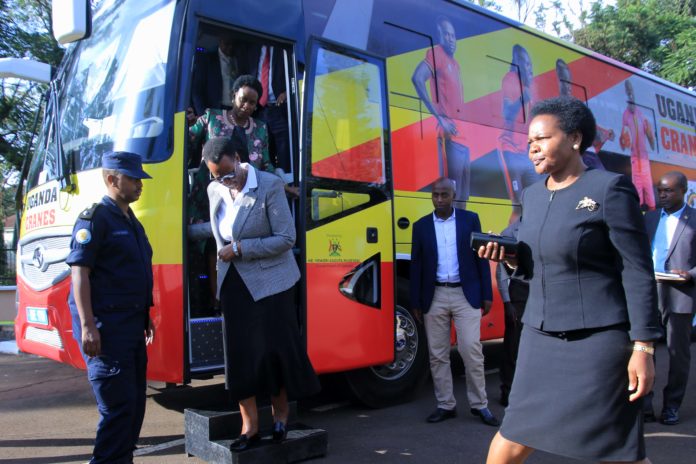 The Minister of Education and Sports Janet Museveni has handed-over the new luxurious and executive Uganda Cranes bus pledged by the President Yoweri Museveni when he hosted the team at his country home in Rwakitura in January 2018.

during the hand over, she applauded the government led by Gen. Museveni for the efforts it has invested in sports and the kind of motivation that has seen individuals and teams excel at different events.

“I hope that the team (Uganda Cranes) will be excited about this bus. I am excited handing over this bus because it surely shows the government’s commitment towards the development of sports in this country. I want to thank the government and specifically the President for the immense support that has been extended to sports” remarked the First Lady according to the fufa website.

The brief function held at State House Nakasero was also attended by officials from the Ministry of Education and sports led by Minister of State for sports Hon. Charles Bakkabulindi, officials from the National council of sports with their chairman Bosco Onyik and acting General Secretary Dr. Patrick Bernard Ogwel.

The FUFA delegation was led by 1st Vice President Justus Mugisha who received the keys for the 49 seater bus from the First Lady.

In his acceptance speech Justus Mugisha thanked the Minister on behalf of government for the consistent support to sports in the country that has resulted into enormous achievements.

“We are here to thank you and the government for the consistent support you have given to sports in Uganda. Thank you also for offering to host us in Rwakitura at the start of last year for that visit has changed sports in unimaginable ways.”

“Your support has enabled us achieve so much. We also want to thank NCS and the ministry for the support. However we have one other request, now that we have qualified let the funds be released on time such that the preparations start right away otherwise we promise you we are going to continue making you proud.” Mugisha said.