The Bududa-Nabweya Gravity Flow Scheme is to be boosted as Umeme plans to connect it to the national electricity grid before President Yoweri Museveni launches it in June this year.

The water facility now uses solar power for pumping water to several sub-counties in the district but this comes difficult when it is rainy season that makes it hard since there is little sunshine.

The water project is government funded and is one the early pledges of President Museveni he made to Bududa then a county under Mbale district. The President made the pledge after finding out how hard it was for the area to access clean water despite area having several rivers and streams.

However, local politicians are said to be frustrating the progress of the project which the government is implementing via a financial cooperation with the African Development Bank.

According to the sources, the politicians have not given clear reasons as to why they are opposed to the project designed to supply over 4450 cubic metres of water to 116,919 people living in the mountainous district prone to landslides.

A source that preferred to remain anonymous politicians are against the project due to local politics as they don’t want some areas of Bulucheke Constituency to be connected to the system. Bulucheke was cut off from Manjiya Constituencies to form two constituencies in Bududa district that borders Kenya as well.

“There politicians in the area who think that the water scheme was meant for residents in Nabweya Town Council and County and they are against water flowing to other areas,” he said.

However, Eagle Online has learnt that despite the frustrations by the said politicians, a recent visit by officials from State House has given a green-light that project was on cause and soon the head of state will launch it. 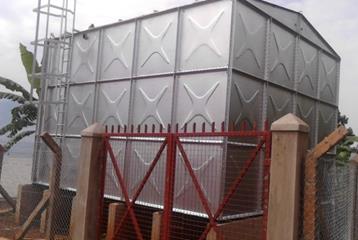 The project intends to connect 2000 points by end of DLP, according to officials from the Ministry of Water and Environment. The project currently has water offices in sub counties of Bushiyi, Bulucheke, Bukigayi, Bushiribo and NabweyaTown Council.

The project was developed after government realised the hardships that the residents especially those living in mountain slopes were facing due to lack of sources of water. Most of them were moving down the valleys to fetch water, a daunting task when climbing up the mountains and hills with jerrycan of water on their heads.

As local politicians oppose the project implementation, findings show that schools, health centres, district offices are already being serviced by the water system, which has changed people’s lives, especially in schools and health centres where good hygiene and sanitation cannot be sustained without water.