Justice Catherine Bamugemereire’s land probe was duped into listening to the Garuga land matter which court settled on December 22, 2017 as 19 plaintiffs won the case in Justice Andrew K. Bashaija’s ruling.

The civil case 207 of 2014 had 19 plaintiffs who included individuals and companies sue defendants Getrude Nakiyimba, Faridah Namirembe Nalumansi Alias Princess Bwanga, Joseph Kanaabo and the Auditor General who was dragged into the case due to the actions of the police on the said suit land.

The court ruling of some of the people in Ntende whom Caster Ssemwogerere rushed to the land probe, claiming the land is part of the estate of the late Daudi Kasimbazi who died in 1959. He is a grandson to the late.

The land was originally registered MRV 152 Folio 12 registered in the name of Daudi Kasimbazi before it changed hands as beneficiaries took up their shares, meaning it could not remain as one block as claimed by Ssemwogerere.

In the judgement by Justice Bashaija, Nakiyimba who claimed to be the administrator of Kasimbazi’s estate assumed that role after the said land had been distributed to various beneficiaries. She was not the beneficiary in the distribution of the said land, according to the will left behind by her father Kasimbazi.

According to the Administrator General land MVR 152, was sub divided and as such claims by Ms Nakiyimba that she is the administrator raises questions of how she assumed that role given the subdivided land.

The judgement shows that Ms Nakiyimba admitted to have trespassed on one of the subdivided plots that was sold to a new person.

“After carefully evaluating the evidence as a whole on this issue, it is clear enough that the 1st (Nakiyimba) – 3rd defendants committed the acts…or were privy to the acts of trespass complained of on the suit land,” reads part of the judgement.

According the judgment, Ms Faridah Namirembe Namusisi alias Princess Bwanga Bwamirembe (second defendant), also admitted entering the suit land on a number of occasions without the consent of the plaintiffs who bought the plots of the sub divided land. She said she had no interest or claim of right in the suit land and that her role was only to take care of cultural heritage of the Kingdom of Buganda.

“Given the evidence adduced by plaintiffs and in view of the admissions made by both the 1st (Nakiyimba) and 2nd (Namusisi)…, each of the defendants trespassed on the suit land,” reads part of Justice Bashaija’s ruling on the matter.

In the ruling Justice Bashaija awarded plaintiffs special damages of Shs160 million and general damages worth Shs200 million as compensation. The special damages comprised illegal excavation of sand and stones, cutting down trees and fences, destroying crops and threatening violence against plaintiffs.Shs200 million was to cover loss and inconvenience caused by continuous actions of trespass on plaintiffs’ land by defendants (Nakiyimba and Namusisi). 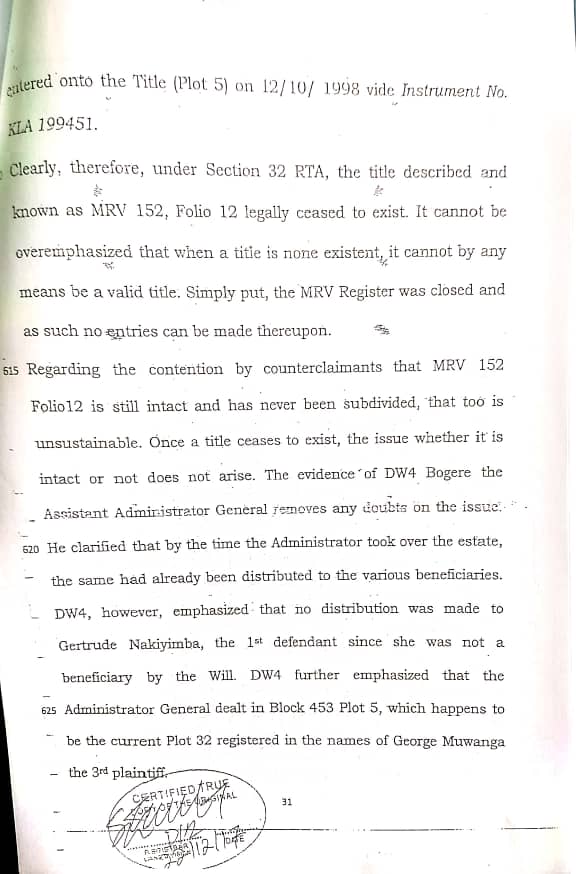 All the 19 plaintiff bought their land from former owners, presenting sales agreements, and would later acquire land titles for their plots. For instance Garuga Musinguzi, the Managing Director of Incafex Limited, says he bought part of the land in 1990 from Evaristo Nyanzi and Andrew Ben Ssengooba, who were the former registered proprietors.

The ruling says each of the plaintiffs is the duly registered proprietor of his or her respective plot of land that they did not have to follow any while buying.

The ruling also quashed actions of the Uganda Police Land Protection Unit who supported Nakiyimba and Namusisi as they trespassed the suit land.

The ruling also required Nakiyimba, Namusisi and Kanaabo to deliver duplicate certificate title of MRV 152 Folio 12 within 21 days from the date of judgement to the Commissioner of for Land Registration for cancellation. The judge warned that failure by the trio to do so would lead to the Commissioner would be directed to recall and cancel the said duplicate certificate title.