The latest interaction with Ms Samantha Mwesigye, a Senior State Attorney who is making headlines in the media because of telling her ordeal of sexual harassment, has finally revealed her tormentor as Christopher Gashirabake, the Director of Legal Affairs in the Ministry of Justice and Constitutional Affairs.

She says t Gashirabake sexually harassed her for over 10 years even though he is the Chairman of the disciplinary committee at the ministry.

She denies sleeping with her Gashirabake as alleged by some of her associates, saying it is the reason why he has sexually harassed her for a decade. “People are trying to make it look like I slept with him and now that it has gone sour I have chosen to speak out,” she says, adding in an audio that she has become a subject of conversation in the public with some people supporting her while others disagreeing with her story.

She says Gashirabake put her into hell with his sexual advances that could latter affect her professional work as well as personal development. She says she has never been in a private space with Gashirabake or even had lunch with him despite his requests.

Ms Mwesigye who has been employed in the ministry since 2007 further reveals that Gashirabake who also worked in the Solicitor General’s office at one time had also gone ahead to frustrate her ambitions of gaining a Masters degree in Executive LLM in Public Procurement Law and Policy.

She had been admitted to the University of Nottingham the course commencing in September 2011.

She says it was the current Solicitor General Francis Atuke who enabled her to do her masters after being frustrated for one and half years, having been approved to get the funds to enable her study. “I got my masters when Mr Atoke was first appointed Solicitor General He found my request pending after having pursued it for one and half years and was being frustrated. I was even put aside for someone who was on probation and didn’t qualify,” she says.

She adds: “He called me and asked why I was sidelined and then approved my masters. It was the decision of the new Solicitor General as he was then who had never seen me before who approved it.”

After listening to Ms Mwesigye’s ordeal Atoke wrote to the university. “We are committed to paying her tuition charged at Seven Thousand Pounds … for the duration of the course. We would further request that you allow her commence the course while we process the payment which shall not be latter than the end of October. The delay is to allow us follow the mandatory procedures attached to spending government money,” -Atoke who was then the Acting Solicitor General said in a letter dated August 29, 2011 to the Postgraduate Admission Office of Nottingham University, UK.

The official who she says she studies with his daughters at university also went ahead to frustrate her when she qualified for UNDP-sponsored course on procurement to the extent that she reached the Office of the Prime Minister for intervention.

Tormentor’s name on shortlist of judges

She says she learnt that her tormentor’s appears on a shortlist of judges to be interviewed for posting. In March the Judicial Service Commission advertises for Justice of the Court of Appeal and Judge in the High Court.

Her promotion to Senior State Attorney

In 2015 Ms Mwesigye was offered an appointment on promotion to Senior State Attorney by the Public Service Commission that sent Ms Mwesigye’s appointment letter through the Director Legal Services in the ministry who would in turn congratulate her and append his signature on that appointment letter. She denies she was wrongly promoted.

The letter of promotion was written by Mr Atoke on November 12, 2015 and copied also to Auditor General Audit Department, the Permanent Secretary Ministry of Public Service and the Secretary Public Service Commission under PSC minute No. 1654 of 2015.

Meanwhile, in the twist of events Ms Mwesigye told this website that her tormentor has turned around to say his enemies are using her to tarnish his image. I guess they are the ones who sent him the email using my email account!!!,” she says. “Have forgotten people offering to fund a polygraph either in Kenya or South Africa. If anyone can convince him to take it we shall put this to rest once and for all,” she says.

She says that she complained to various offices, starting with the ministry itself, Solicitor General, the IGG, Office of the President and the Office of the Prime Minister but all those offices failed to come to her rescue.

Experts define sexual Harassment at workplace is a direct or implicit demand or gesture to a worker for any form of sexual favor to get preferential treatment at workplace; or threaten the worker of detrimental treatment on present or future employment status of the worker. It also includes use of uncouth language such as verbal advances, sexist comments and jokes, unwarranted flirting and also extends to sending by text or other media platforms sex laden suggestive pictures, objects or written materials .It may also entails physical contact and unwanted touching and patting. 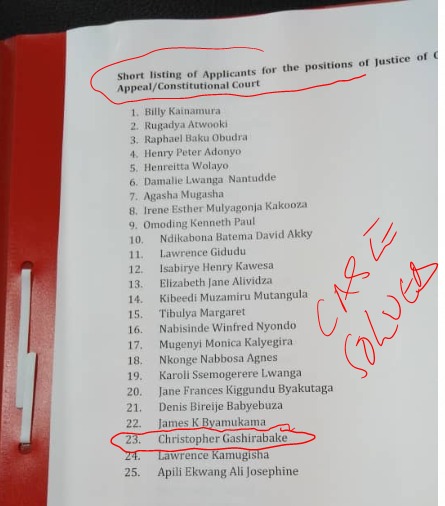 In addition Employment act (Sexual Harassment) Regulations 2012 prescribes that those who contravene the sexual harassment related provisions commit an offence and are liable, on conviction, to a fine not exceeding six currency points or imprisonment not exceeding three months or both.

Sexual harassment affects ones esteem and productivity at a work place and it is prudent to report to relevant authorities, experts say.