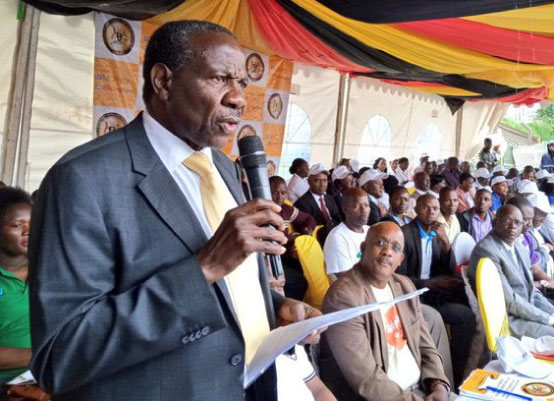 The Ministry of Finance Planning and Economic Development (MOFPED) in conjunction with Uganda Revenue Authority (URA) and the Civil Society Budget Advocacy Group (CSBAG) on Friday embarked on tree planting along Bombo Road as part of their national corporate social responsibility ahead of the reading of Shs40.4 trillion national budget on June 13, 2019.

The planting of the trees, presided over by the Finance Minister Matia Kasaija, is part of the activities earmarked in the national budget month launched on May 14, 2019 and will end on June 21, 2019, with breakfast meetings in Arua, Lira, Soroti, Kampala, Hoima and Kabale, targeting regional small and medium enterprises (SMEs) seen as an engine of economic growth.

“As a government, we set a target to reverse a trend in environmental degradation and increase the percentage of the land covered by vital ecosystems from the current 19.9 per cent to 24 per cent by 2024,” he said.

“Tree planting is a key activity because Uganda’s economy is majorly dependent on climate-sensitive sectors like Agriculture and Tourism. This calls for paying more attention to the environment for a sustainable economic growth,” he said.

“Industrialization leads to deforestation and pollution. Trees are the heroes of all these effects. Healthy ecosystems are critical for provision of food, water and many other services that the growing human population needs thus the exercise comes in handy” said Kasaija.

He called on people to pay more attention to environmental issues such as climate change, if Uganda’s economic growth is to be sustained.

According to the report of the parliament’s Budget Committee presented 74.5 per cent of the budget is expected to be domestically financed while 24.5 per cent by External resources.