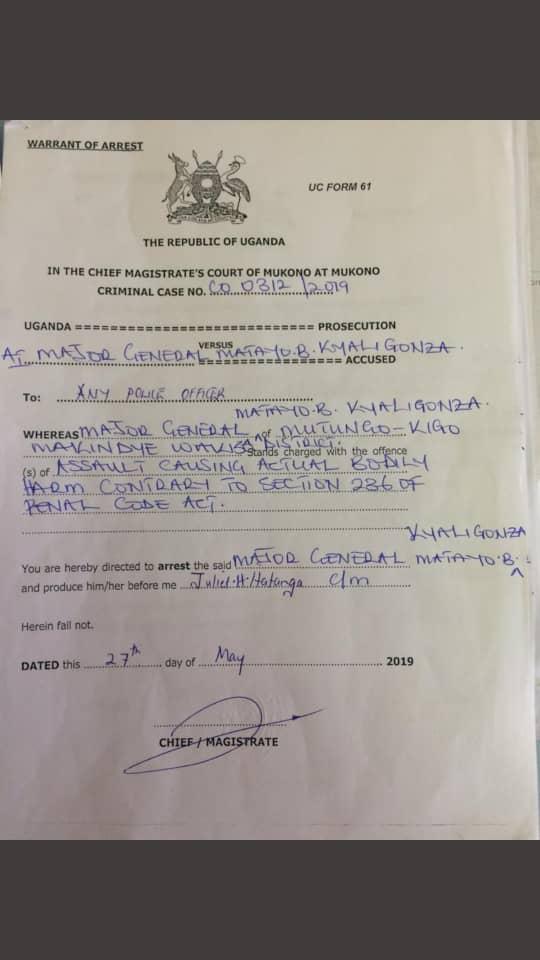 The Mukono Chief Magistrate court has issued a warrant of arrest against Uganda’s ambassador to Burundi, Maj Gen (rtd) Matayo Kyaligonza and his bodyguards over assault of police traffic officer, Sgt Namaganda Esther.

Magistrate Juliet Hatanga, ordered that Kyaligonza, his two bodyguards; RA/221607 L/CPL Bushindiki Peter and RA/230927 Okurut John Robert be arrested and taken to court on June 10 to plead to the charges after they repeatedly defied court summons.

Prosecution avers that on February 24, 2019 Sgt Namaganda faced it rough when she stopped Gen Kyaligonza’s vehicles that were wrongfully making a U-turn in the middle of the road at Seeta junction.

According to justice Hatanga the three inflicted a grievance harm to officer’s body an act that is contrary to section 236 of the Penal Code Act, they should however appear before Court for proceeding.

Kyaligonza’s lawyers David Balondemu, Evans Ochieng and Caleb Alaka claimed that their client is being tried in two courts (Mukono court and the General Court Martial) at the same time and can’t attend all the concurrent proceedings, but court dismissed their submissions.

In press conference earlier called by the ambassador in question, he challenged Sgt Namaganda to table evidence indicating that he assaulted her and he vowed to drag to court any person who accuses him of assaulting Sgt Namaganda Esther.