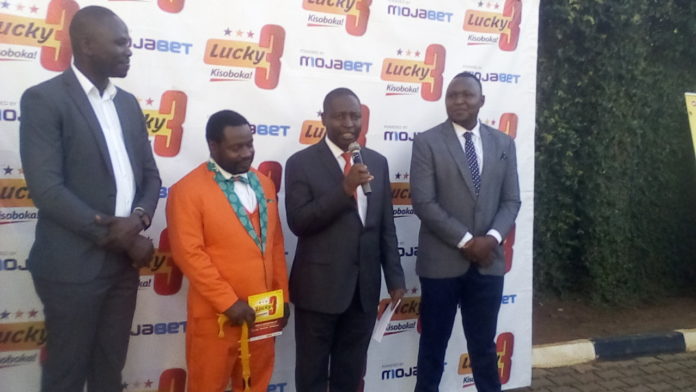 Licensed in 2018 to operate games of numbers and chance, Mojabet is the company behind the game Lucky3 being advertised under the Kisoboka Campaign.

Lucky3 is played by picking any three lucky numbers and sending them to 6000 through a toll-free message.

“All, a player has to do is go to their message prompt on their phones, type out their three lucky numbers, leave a space, then insert the amount they want to play and then send to 6000. That SMS will be free.

“They will then be prompted to insert their Mobile Money PIN and they will enter a draw. There is a draw or call it a new game every ten minutes and one can stake between Shs1,000 – 50,000 and stand a chance to have their stake multiplied 250 times, should their lucky three numbers match the draw numbers,” Mr Ceasor Chanaka, the company’s Operations Manager explains.

He added, “Our main offering is fun and the recreation that comes with the added possibility of making millions.”

Mojabet is a game changer in Uganda’s budding entertainment industry as it leverages on technology and innovations to bring to the public entertainment from the comfort of their homes, offices and cars. You do not have to visit a gaming house, all you need is your phone, computer and some mobile money on your phone, whichever network.


“We know there are many people out there that love gaming, whether alone or with friends, but find themselves limited by the inability to go to a gaming house. At Mojabet, we are all about utilizing our technological proficiency to provide seamless ways for our customers to access our services. Our first game, Lucky3 is currently accessible via SMS, USSD and Online,” Mr Chanaka said.

Mojabet is part of a continental multinational technology and entertainment company, Moja Group Inc. whose goal is to revolutionalize entertainment consumption in Africa while creating opportunities for the Continent’s largely young population.

The Group is currently operating in seven African countries; Kenya, Tanzania, Uganda, Democratic Republic of Congo, Zambia, Ghana and Ivory Coast. Seven more subsidiary operations will be opened by the end of this year.

Mr Isaac Imaka, Moja Group’s local partner and director said the group wants to be Africa’s leading and most trusted gaming and tech-based entertainment company by investing heavily everywhere they establish to ensure that not only do they make profits; but that even those who work with them earn and benefit happily.

“In Uganda for instance, even before we make the first coin, we are investing close to a million dollars in setting up and salaries for over 25 young staff who average 33 years in age. I can comfortably say that we are the leading, gaming house in the country when it comes to remuneration,” said Mr Isaac Imaka, who also doubles as Mojabet Uganda’s Business Development Manager.

Highlighting the company’s resolve in combating irresponsible gaming, Mr Imaka said, “It is not all about dollars and cents in our world. We recognize the importance of responsible gaming for the sector and as a company, we started off with a policy, leveraging on our technological proficiency, to detect addictive behaviour early.”

“We also monitor and track players to fish out problem gamers and we have partnered with a rehabilitation center, EACAS, which will educate the public about responsible gaming and also offer cancelling services to referred addicts.”

He added, “Gaming is largely seen as a vice for the young people but on the contrary in Mojabet, young people were the first to benefit through jobs, not to mention the Corporate Social Responsibility activities that we are going to start engaging in by the close of the year. We want to contribute to the education and health sectors.”

LUCKY3 allows players to pick three single-digit lucky numbers between 0 – 9 in any order, place any stake between Shs1,000 – 50,000 and stand a chance to win within 10 minutes. One can play through their Mobile phone via free SMS; USSD or Online. By playing, the participants stand a chance to multiply their stake by 250 times. This means that if one plays with Shs 50,000, they could win up to Shs12.5 million within just 10 minutes. Players also win 10 times their stake if they get the draw numbers, but not in the exact order.

Lucky3 further gives a replay ticket into the next draw when a player matches any 2 of the draw numbers. The excitement can only grow as the winning numbers change every ten minutes. All draw results are published on their website at www.lucky3.ug.

Lucky3 also has a weekly draw that you can watch on Bukedde TV1 at 9:45 PM every Saturday. For every Shs1,000 played through the week, the player gets an entry into the Weekly Jackpot Draw whose ultimate prize starts at a minimum of Shs35 million. Past broadcasts of the same will also be available on the Lucky3 Youtube page.