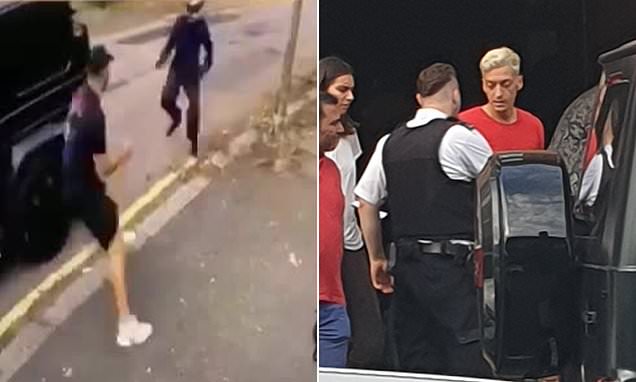 Arsenal stars Mesut Ozil and Sead Kolasinac were chased for a mile by knife-wielding motorbike riders in an attempted daylight car-jacking in north London yesterday.

Ozil, a £350,000-a-week midfielder, was ambushed by the robbers as he drove his black Mercedes G-Class through leafy Childs Hill at around 5pm on Thursday.

But as the thugs surrounded the 4×4, Ozil’s Arsenal teammate and childhood friend, Sead ‘The Tank’ Kolasinac, leapt out and bravely took them on.

CCTV footage form the scene shows Kolasinac swinging punches at the attackers and standing his ground against them despite being threatened with a knife. The attackers’ motorbike pulls away as the footage cuts.

But rather than that being the end of the drama, the players were then chased through the mansion-lined streets of north London in Ozil’s 4×4 in a high-speed chase that lasted for more than a mile.

The childhood friends sped towards a Turkish restaurant on Golders Green Road where they are known, and staff raced to their aid as they abandoned the Mercedes 4×4 in the road.

Witnesses said 30-year-old Ozil looked ‘terrified,’ as the waiters and chefs rushed to defend their friend.

One witness told MailOnline: ‘I saw Ozil being chased up my High Street by boys armed with knives.’

CCTV footage captured before the chase began shows burly 6ft Bosnian Kolasinac squaring up to and rushing at a robber whose face is obscured by a crash helmet.

The 26-year-old darts toward the front end of the Mercedes to face off an attacker as he makes sure the front passenger door is protected.

The fullback then turns to the rear of the vehicle to steam towards an oncoming assailant who appears to be wielding a blade while wearing a motorbike helmet.

At this point Ozil is able to drive forward in the £100,000 SUV as Kolasinac swings his bare-fists at the thug.

Off camera, Kolasinac was able to rejoin Ozil in the car and they sped away together, pursued by the raiders.

Waiters and chefs from Turkish restaurant Likya rushed to the aid of the football stars when they arrived forcing the riders to flee empty handed.

Neither of the Premier League players from the north London club were harmed during the incident.

Financial worker Azuka Alintah, 36, told the MailOnline: ‘Ozil looked absolutely terrified, as anybody would after being chased by men with knives.

‘He looked like he was running for his life. And I suppose he was.

‘I saw him disappear into the restaurant with the motorcycle guys on his tail.

‘They didn’t take off their helmets and were all in black, wearing long sleeved tops in this hot weather. They stood out.

‘God knows what would have happened if they’d caught him. It looked to me like he’d have been hacked to shreds and he clearly thought so too.

‘As soon as the restaurant staff started to come to the window and to the doorway, they turned around and roared off.’

Kolasinac’s fearless defence of his teammate is unsurprising to many Gunners fans who saw how Ozil took the Bosniak under his wing when he joined the north London club in 2017.

The pair have been friends since their teenage years, when Kolasinac looked up to the five-years-older Ozil when they were both at German side Schalke 04.

They became exceptionally close and last month they were pictured together at Kolasinac’s marriage to Bella, alongside Ozil’s wife Amine Gulse in Baden, Germany.

Indeed, both Bella and Amine wore wedding dresses by the same designer at their recent ceremonies. The Ozils’ wedding in Instanbul took place in the same week as the Kolasinac’s and Turkey’s President Reccep Tayyip Erdogan was Ozil’s best man.

After yesterday’s attack, Ozil’s car, with distinctive gold trim, was left in the middle of the Golders Green Road with the driver’s door open.

After police arrived they blocked off the road as other units looked for the motorcycle raiders. – Daily Mail UK