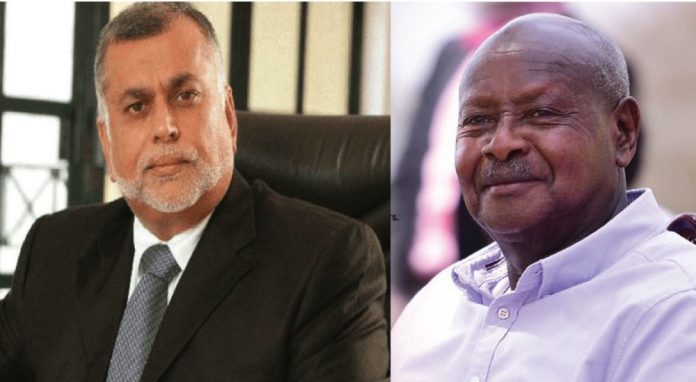 Sudhir Ruparelia, the Chairman of the Ruparelia Group has been named among the most influential personalities in Uganda according to a survey conducted by Public Opinions International a Pan African Organisation that operates in Africa and Asia.

The survey was conducted between January 2019 and July 2019.

According to the survey, a section of young Ugandans were asked who inspires them and who they want to emulate when they grow up.

According to Adam Luzindana Buyinza, the executive director of Public Opinions Intention of the list is to inspire young people to achieve their dreams.

According to Forbes in 2015, he was the 27th wealthiest individual in Africa, with an estimated net worth of US $800 million. Ruparelia was born in Kabatoro in Kasese District in the Western Region of Uganda to an upper-middle-class Indian Gujarati family.

He moved to the United Kingdom with his parents in 1972 at the age of 16, when the dictator Idi Amin expelled all Asians from Uganda.

He returned to Uganda in 1985, with US$25,000 earned from several casual jobs including working in supermarkets, factories, and butcheries.

Today he owns one of the biggest business empires in the country spanning several sectors.

“Young people must know that everything is possible if one focusses and has discipline,” Buyinza said.

Sixteen Ugandans from the political, social and economic spheres were identified.

After victory, he formed a broad-based government that helped to unite the country’s political groups. Previous to the struggle of 1981-1986, Museveni had been one of the leaders in the anti-Amin resistance of 1971-1979 that had led to the fall of that monstrous regime.

Museveni, who has been politically active since his student days at Ntare School, Mbarara, in South West Uganda, studied political science at the University of Dar es Salaam, graduating in 1970 with a Bachelor of Arts degree in Economics and Political Science.

After Idi Amin’s coup in 1971, Museveni was instrumental in forming FRONASA (the Front for National Salvation).

Yoweri Kaguta Museveni was born in 1944 during the Second World War and his name was taken from the Abaseveni, who were Ugandan servicemen in the Seventh Regiment of the King’s African Rifles into which many Ugandans had been drafted.

President Museveni is a man with very strong convictions, his political vision on how to lay a foundation for reconciliation and national harmony enabled him to accommodate ideas that were often opposed to his.

One of his greatest contributions to the politics of Uganda, therefore, has been to spearhead a policy of reconciliation after two decades of social and political turmoil.

Under his leadership, the Movement government has ended the vicious circle of vengeance and hatred that had ruined the country.

Lt General Muhoozi Kainerugaba is a Senior Presidential Adviser for Special Operations since 2017.

He is a Ugandan military officer. He is a Lieutenant General in the Uganda People’s Defence Force (UPDF) and was the commander of the Special Forces Group, which contains the unit known as Presidential Guard Brigade responsible for providing security to the President of Uganda from 2008 to 2017.

The Special Forces Group is also responsible for providing security at Uganda’s oil installations. He is married to Charlotte Nankunda Kutesa, and together they have 3 children, as a child, Kainerugaba attended schools in Tanzania, Mount Kenya Academy in Nyeri Kenya and Sweden.

After his father became President of Uganda, he attended Kampala Parents School, King’s College Budo for a while and St. Mary’s College Kisubi, a residential middle and high school, located approximately halfway between Kampala and Entebbe.

He was later admitted to Egyptian Military Academy where he took both the company and battalion commanders courses.

In 2007 he was admitted to a one-year course at the United States Army Command and General Staff College at Fort Leavenworth, Kansas, graduating in June 2008.

Her Royal Highness Sylvia Nagginda (born 9 November 1964) is the current Nnabagereka or Queen of Buganda, a historic kingdom in modern-day Uganda.

Nagginda was born in England in 1964 to John Mulumba Luswata of Nkumba, Entebbe and Rebecca Nakintu Musoke and returned to Uganda shortly thereafter to be raised by her grandparents of the Omusu Clan.

She is the granddaughter of George William Musoke and Nora Musoke of Nnazigo, Kyaggwe, and Omutaka Nelson Nkalubo Sebugwawo and Catherine Sebugwawo of Nkumba. She has three brothers and three sisters.

Sylvia attended Lake Victoria Primary School, in Entebbe, Gayaza Junior School, and Wanyange Girls School. After graduating from secondary school she went to the United States to continue her studies.

Emmanuel Tumusiime-Mutebile is the Governor Bank of Uganda.

He is a Ugandan economist and banker.

He then attended Makerere College School in Kampala for his A-Level studies (grades S5-S6).

In 1970, he entered Makerere University, where he was elected Guild President of the university Students’ Guild.

He was forced to flee Uganda in 1972 after he gave a speech publicly criticising the expulsion of Asians from the country by Idi Amin then President of Uganda.

He fled to England via Tanzania, and was able to finish his studies at Durham University, graduating with an upper-second in Economics and Politics.

In 1992, he was appointed permanent secretary to the newly combined Ministry of Finance Planning & Economic Development.

He is the longest serving chief executive in the Bank of Uganda’s history.

Prince Kassim Nakibinge is the TITULAR HEAD of the Muslims in Uganda.

Nakibinge is a businessman and Bank executive. He was born in 1966. His father is Badru Kakungulu who died 1991.

He is a paternal uncle to Muwenda Mutebi II, the reigning King of the Great Kingdom of Buganda.

He studied at Kabojja Preparatory School and Savio Junior School for his primary education.

He attended St. Mary’s College Kisubi for his O-Level studies, and Kibuli Secondary School for his A-Level education.

He pursued postgraduate education at the University of Wales in Cardiff, graduating with a Master of Business Administration degree, majoring in finance.

In 2014, the University of Lahore in Pakistan bestowed upon him an honorary Doctor of Philosophy degree in recognition of his contribution to the promotion of the education of Muslims in Uganda.

Kariisa is the chief executive officer of Next Media, the holding company for NBS TV, Nile Post, Sanyuka, Nxt Radio and a host of other companies.

NBS TV is currently the leading television station in Uganda.

He is also the board chairman of Eco Bank Uganda. He sits on boards of several compnaies.

Kariisa holds a honorary PhD in proven extra ordinary achievement and service in the community and across the world from the United Graduate College, Texas, USA.

He has a Masters degree in Computer Engineering from Huazong University of Science and Technology and MBA from United States International University, Nairobi Kenya.

He has done Several courses in Strategic Leadership and Business Management from Harvard University, USA

He holds a Bachelors’ of Statistics degree from Makerere University, Kampala.

General Haji Abubaker Jeje Odongo a Senior Military Officer and Minister of Internal Affairs in the Cabinet of Uganda since June 2016.

Previously he served as Minister of State for Defence from February 2009 to June 2016 Jeje Odongo was born in Amuria District in Teso sub-region in Eastern Uganda.

In 1994, Jeje Odongo was one of the Ten Army Officers who represented the Ugandan military in the Constituent Assembly that drafted the 1995 Ugandan Constitution.

In 1996, he was appointed to replace Colonel Sserwanga Lwanga as the Political Commissar in the Uganda People’s Defense Force (UPDF).

Also in 1996, he contested the Parliamentary Seat for Amuria District in Parliament.

In 1998, he resigned his parliamentary seat and his cabinet position and was appointed Commander of the army taking over from Major General Mugisha Muntu.

He served as army commander until 2001, when he was replaced by Major General James Kazini.

In 2001, he was appointed as Minister without Portfolio, a position he occupied until 2004.

In 2004 while at the rank of Lieutenant Gen, Jeje Odongo was appointed as Minister of State for the Environment.

Between 2001 and 2006, he was one of 10 senior UPDF officers who represented the Ugandan Military in the 8th Ugandan Parliament