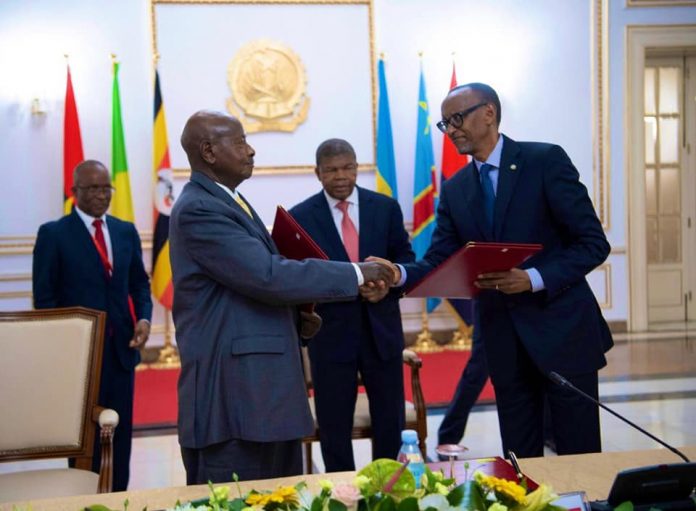 Ugandas President Yoweri Museveni and his Rwandan counterpart, Paul Kagame have signed  a pact dubbed a Memorandum of Understanding of Luanda between the republic of Uganda and the republic of Rwanda to among other things resume the cross-border activities between the two countries.

According to the communiqué the republic of Uganda and the republic of Rwanda, that were considered as parties, considering the close geographical, historic and cultural ties between the two countries and their peoples and reaffirming the decisions of Quadripartite summit between the heads of state and government of the republics of Angola, Democratic Republic of Congo, Uganda and Rwanda, which took place in Luanda, Republic of Angola July 12, 2019, the parties undertake to:

“Respect the sovereignty of each other’s and of the neighbouring countries, refrain from actions conducive to destabilization or subversion in the territory of the other party and neighbouring countries, thereby eliminating  all factors that may create such perception as well as that of the acts such as financing, training and infiltration of destabilizing forces” reads the communiqué sent to newsrooms.

The summit also directed the two leaders to protect and respect the rights and freedoms of the nationals of the other party residing or transiting in their national territories in accordance with the laws of that country.  The leaders further asked the two East African countries to resume cross-border activities. The call to open the border comes at the time when Rwanda closed her Katuna border limiting Ugandan products from accessing Rwandan market. Rwanda further blocked her citizens from traveling to Uganda claiming Uganda was hostile neighbour.

“Resume as soon as possible the cross-border activities between both countries, including the movement of persons and goods for the development and improvement of the lives of their population”