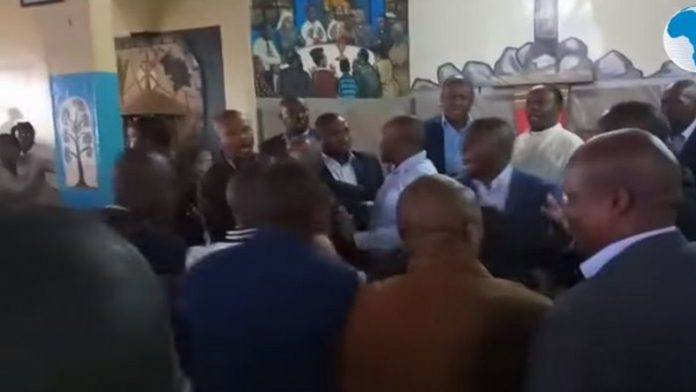 The hashtag #ShameOnTheChurches is trending in Kenya after a Sunday service at a Catholic Church descended into chaos when two MPs started fighting.

They had both addressed the congregation in the town of Kiharu, in central Murang’a county when the argument broke out.

People on Twitter have been sharing footage of the punch-up.

It is not uncommon for politicians to use church services to push their political agendas – as many of their constituents attend church on Sundays.

Much of the politics in the East African nation is currently dominated by who will run in the 2022 elections – and the ruling Jubilee party has divided into factions over the heated issue.

The MPs involved in the fracas were both from the Jubilee party, but from opposing factions.

The fight started when Kiharu constituency MP Ndindi Nyoro refused to hand back the microphone to Maina Kamanda, a politician from the capital, Nairobi, who was overseeing the political segment of the service.

“I can’t allow people from Nairobi to come and take over my constituency as if they know this area. I am an elected leader,” Mr Nyoro, is quoted by Kenya’s Daily Nation newspaper as saying.

Scuffles broke out and the county’s police chief Josephat Kinyua had to intervene to separate them.

Mr Nyoro’s supporters then rushed to his side to stop his possible arrest and the church became disorderly – and fighting continued outside the church.

Following the mayhem, the Catholic Church in central Kenya, where the issue of whether Deputy President William Ruto should run to be the next president is most contentious, has now banned politicians from speaking during its services.