Those wanted in the  warrant are Ismael Gafaranga and Alex Sugira.

According to the statement, South Africa’s National Prosecuting Authority (NPA) informed private prosecutor Gerrie Nel that it has issued warrants of arrest for two of the four alleged murderers of Rwanda’s former head of intelligence.

This is according to a statement on Monday by AfriForum, where advocate Nel leads the private prosecution unit. Col Patrick Karegeya had sought refuge in South Africa, but was found strangled in a Sandton hotel room on December 31 2013.

In April this year, the Randburg magistrate’s court referred the case back to the NPA for it to decide whether it would prosecute the suspects. On Monday, AfriForum said it had been informed that the NPA was also in the process of applying for the extradition of the other two suspects.
As soon as the extradition request is granted, it said, the NPA will apply to Interpol for the issuing of  “Red Notices” for the suspects.
Nel voiced concern that the warrants for arrest were issued without any further investigation. Nevertheless, he said: “We welcome the current steps and hope the NPA will continue with the process keenly. AfriForum’s private prosecution unit and the family of the deceased will closely monitor the process.” 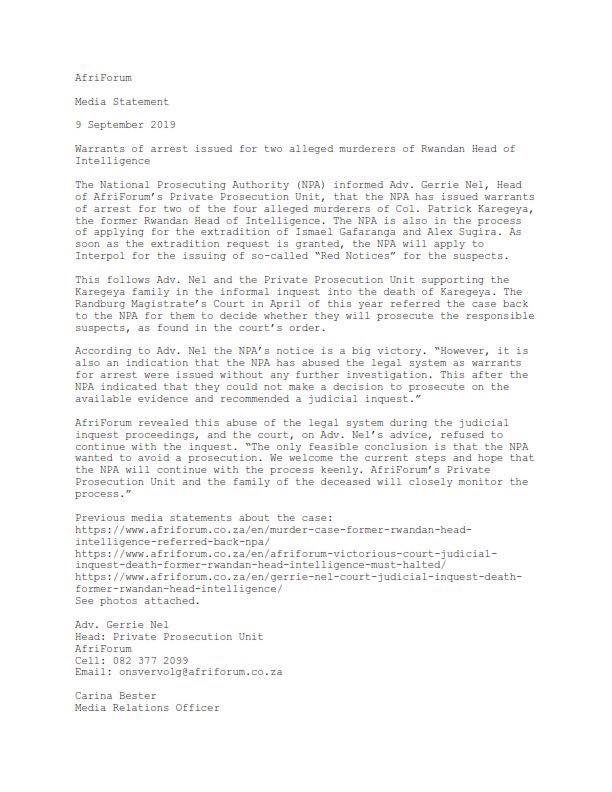 Karegeya was the head of external intelligence in Rwanda for around a decade before being demoted to army spokesperson. He was later arrested and jailed. He was stripped of the rank of colonel in 2006 and went into exile in 2007.
Nel said previously that the lead investigator, in a statement on January 8 2014 and just over a week after the murder, had identified the suspects as four Rwandan citizens.

According to Nel, the lead investigator said in a statement that they left South Africa on January 1 2014 and the last witness statement was taken in April 2015.