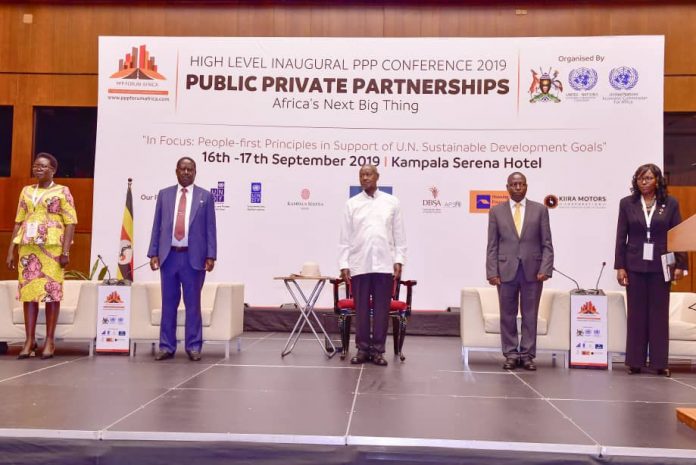 “Our Government is a government of grandfathers, parents and grandchildren. That’s why I keep telling the ‘Bazukulu’ that instead of praising the USA, let us fight to make the United States of Africa …” he added.

Museveni was yesterday speaking at this year’s Public Private Forum was held at the Kampala Serena Hotel where he the guest of honour.

The theme of the conference was ‘Africa’s Next Big Thing’ and was attended by leaders from various African and European leaders.

Museveni was accompanied by Kenyan monolith Raila Odinga, former Prime Minister and opposition leader who addressed the guests at the forum on boosting trade and business in Africa.

“There a new thinking on how to finance the opening up of Africa and all regions to business, travel and trade. Our countries increasingly recognize the importance of infrastructure and are actively exploring solutions to fund the required development.” said Odinga.

He also urged Africans to trade more with themselves than with foreigners in order to promote integration across borders, citing the late Tanzania president Julius Mwalimu Nyerere who was willing to delay Tanzania’s independence so that Uganda and Kenya could achieve theirs at the same time. This he said, greatly strengthened the East African relations and thus the need for one currency and universal border.

Meanwhile, Museveni  acknowledged Raila Odinga’s analysis of India and how Public Private Partnerships (PPPs) played a vital role in the stabilization of its economy; hence the crucial role of the private sector in any country’s development. Museveni also prioritized infrastructure as a key element in the development of any economy as well as the reduction of greed and profit hungry motives.

Further agreeing with Odinga, Museveni cited Adam Smith’s 1776 ‘Wealth of Nations’ book in which he says that a primitive man produces only for himself, whilst the modern people produce for themselves and for sale. He encouraged Ugandans to promote production beyond themselves and engage in cross border trade if they are to improve their way of life.

The president commended the organisers of the forum, saying it helps people to share ideas. Museveni was later joined by several dignitaries as they toured kiosks of corporate companies such as KIIRA Motors that showcased their various products.

Dr Agnes Atim Apea, the Chairperson Local Government Finance Commission highlighted a few key elements that would be necessary for a conducive environment that would ensure the success of PPPs, among these factors she included political will as well as Public and private producer-community partnerships. These were further echoed by Museveni who cited organizations such Operation Wealth Creation as a good example of a successful and effective PPP.

The summit that was founded in Egypt in 2006 in a bid to increase the role of the private sector in the delivery and development of public services such as transportation and networks is the first of its kind in Africa taking place from the 16th-18th of this month.

Other organisers of the event also include Housing Finance, Kampala Serena Hotel and the United Nations Development Programme.