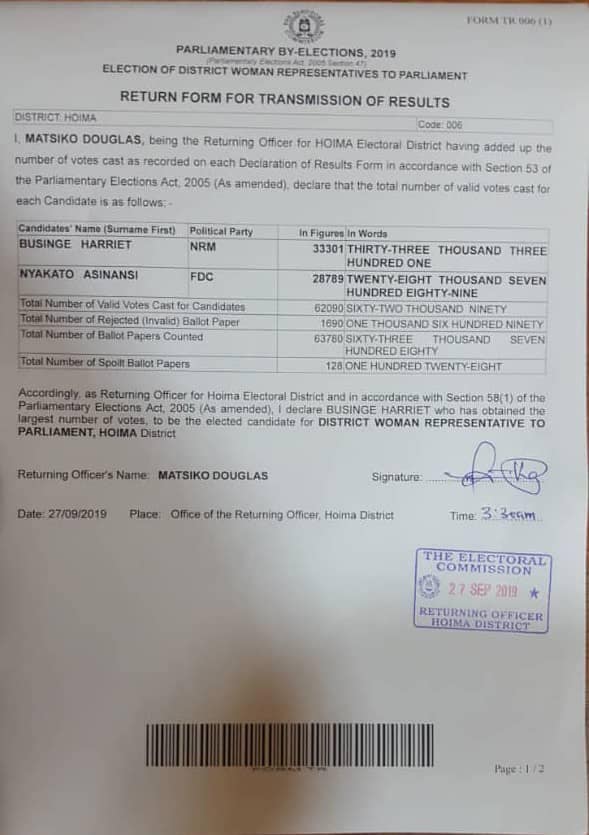 Hoima district returning officer Matsiko Douglass declared Businge winner of the women’s seat after beating her rival Nyakato Asinasi of the Forum for Democratic change with 33,301 votes against twenty 28,789.

The by-election was intended to fill a vacancy left behind after former Hoima District Woman MP, Kaahwa Tophace Byagiira crossed to represent a newly created district of Kikuube.
Hoima district in mid-western Uganda is comprised of two (2) Counties, one (1) Municipality, 17 Sub Counties 69 Parishes and total number of 143,272 Voters on the register.

Meanwhile NRM was able to win Kaabong district as Christine Tubo Nakwang got 22532 votes against FDC rival Judith Adyaka Nalibe who got 1692 votes though she had withdrawn from the race against the wishes of her party. 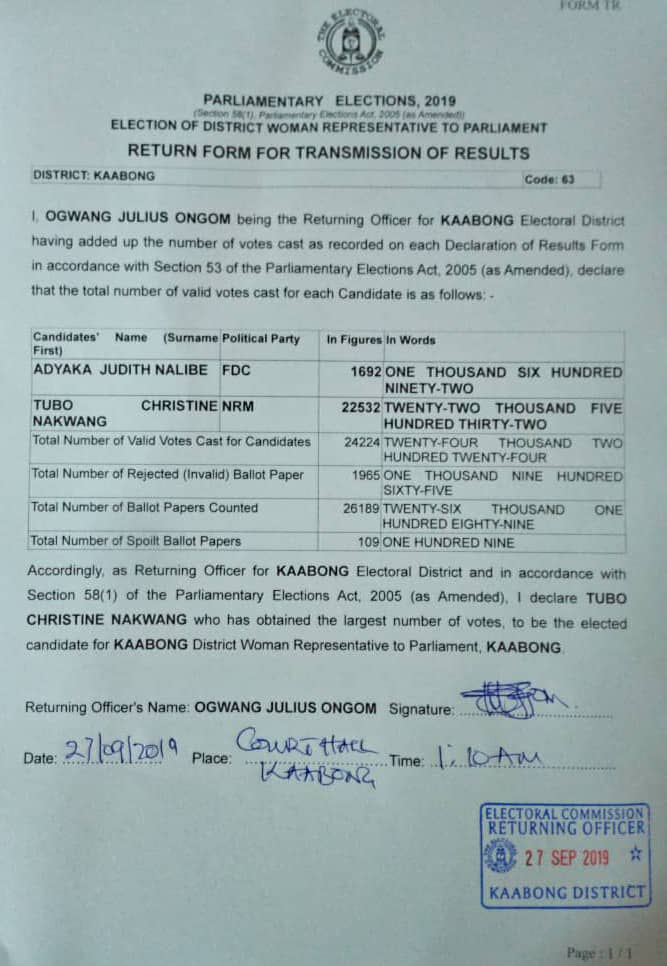 HOIMA AT A GLANCE

In elections were held in 266 polling stations, 69 parishes, and 17 Sub Counties that make up Hoima District.

According to election observers, polling in about 20 percent of the polling stations did not commence on time – because the mandatory five (5) voters to witness the opening of the polling were not present;

In about 10 percent of the polling stations, voting commenced after 7:30am because of delayed delivery of polling materials.  Voting at Kyarwabuyamba Mosque – north and south polling stations in Bujumbura Division started after 9:00am due to late arrival of voting materials;

Polling Officials at all polling stations observed were however present and in time to commence polling at 7:00am;

Polling Officials including a Presiding Officer (1), Polling Assistants (2) and Polling Constable(s) (1-2) were present at each polling station throughout Hoima District;

Whereas Polling Officials appeared knowledgeable about their role in election administration, in about 5 percent of the polling stations visited, officials did not appear confident to execute their duties independently.  The Presiding Officer at Hoima Municipal Council K-Z polling station was not confident enough to verify the quantities of the polling materials received from the EC.  It had to take the intervention of superior EC staff to confirm the quantities of the polling materials received, for polling to commence (after 9:00am);

Neither the EC nor political parties and candidates recruited Persons with Disabilities (PWDs) either as polling officials or candidate’ agents – in the polling stations observed;

There was a higher presence of female voters at 85% of the polling stations visited.  Hoima Boma polling station in Kahoora Division for instance had 334 registered voters; 179 of these were female.  By 7:30am, eight (8) of the ten (10) voters in the queue were female.

The polling stations had presence of candidate’ agents (National Resistance Movement and Forum for Democratic Change);

Political party/candidate’ agents arrived at almost 80% of the polling stations before 7:00am;

Each of the candidates’ agents had a copy of the voters’ register.  Agents appeared to be vigilant and well trained about their roles.  At Hoima Municipal Council polling station, a candidate agent identified three (3) persons on the voters’ register who she claimed were ineligible voters (dead);

The voting process was generally orderly and appeared to be well understood by the voters. Polling staff assisted voters that required clarity on the procedure and process. In at least 60% of the polling stations, priority was given to the aged, pregnant women, voters with infants and persons with disabilities. In accordance with election regulations, voters who required assistance were also allowed to vote with assistance from a person of their choice;

There was higher prevalence of assisted voting in the rural areas of Hoima district;

Throughout the polling day, there was numerous allegations and counter allegations of voter bribery as well as claims and counter claims of pre-ticked ballots by both FDC and NRM political parties.  It was hard to verify the allegations though.

The Biometric Voter Verification Kits (BVVKs) generally functioned well. In almost all polling stations visited, the voter verification process was fast and lasted under three minutes for a voter;

At Kyarwabuyamba Mosque – north and south polling stations voting delayed to commence because the Presiding Officers mixed up the BVVK codes.  A supervisor from the EC responded and fixed the problem;

There was presence of uniformed security personnel during the by-election. The role of security on the polling day was largely limited to escorting electoral materials to polling stations as well as patrolling in the 17 Sub Counties of Hoima District.  Polling Constables were also present at all the polling stations observed;

Whereas there was tension reported in Kabaale Sub County due to arrests of the opposition candidate’s agents, it was noted that polling in that area proceeded without interruption or any major incidents;

The counting process at polling stations was transparent, open and in compliance with the electoral procedures and regulations.