Global warming has become a clear and present threat. Actions and commitments to date have fallen short. The longer we wait, the greater the loss of life and damage to the world economy. Finance ministers must play a central role to champion and implement fiscal policies to curb climate change. To do so, they should reshape the tax system and fiscal policies to discourage carbon emissions from coal and other polluting fossil fuels.

The Fiscal Monitor helps policymakers choose what to do and how to do it, right now, globally and at home.

A better future is possible. Governments will need to increase the price of carbon emissions to give people and firms incentives to reduce energy use and shift to clean energy sources. Carbon taxes are the most powerful and efficient tools, but only if they are implemented in a fair and growth-friendly way.

To make carbon taxes politically feasible and economically efficient, governments need to choose how to use the new revenue.  Options include cutting other kinds of taxes, supporting vulnerable households and communities, increasing investment in green energy, or simply returning the money to people as a dividend.

The price to pay

To limit global warming to 2°C or less—the level deemed safe by science—large emitting countries need to take ambitious action. For example, they should introduce a carbon tax set to rise quickly to $75 a ton in 2030.

This would mean household electric bills would go up by 43 percent cumulatively over the next decade on average—more in countries that still rely heavily on coal in electricity generation, less elsewhere. Gasoline would cost 14 percent more on average.

But the revenues from the tax, between ½ and 4½ percent of GDP (depending on the country), could be used to cut other taxes, such as income or payroll taxes that harm incentives for work and investment.

Governments could also use the money to support disproportionately affected workers and communities, for example coal-mining areas, or pay an equal dividend to the entire population. Alternatively, governments could compensate only the poorest 40 percent of households—an approach that would leave three quarters of the revenues for additional investment in green energy, innovation or to fund the Sustainable Development Goals.

Taxpayer money would also help save more than 700,000 people a year in advanced and emerging market economies who currently die from local air pollution. And the money would help contain future global warming, as agreed by the international community.

It can be done

About 50 countries have a carbon pricing scheme in some form. But the global average carbon price is currently only $2 a ton, far below what the planet needs. The challenge is for more countries to adopt one and for them to raise the price.

Sweden has set a good example. Its carbon tax is $127 per ton and has reduced emissions 25 percent since 1995, while the economy has expanded 75 percent since then. 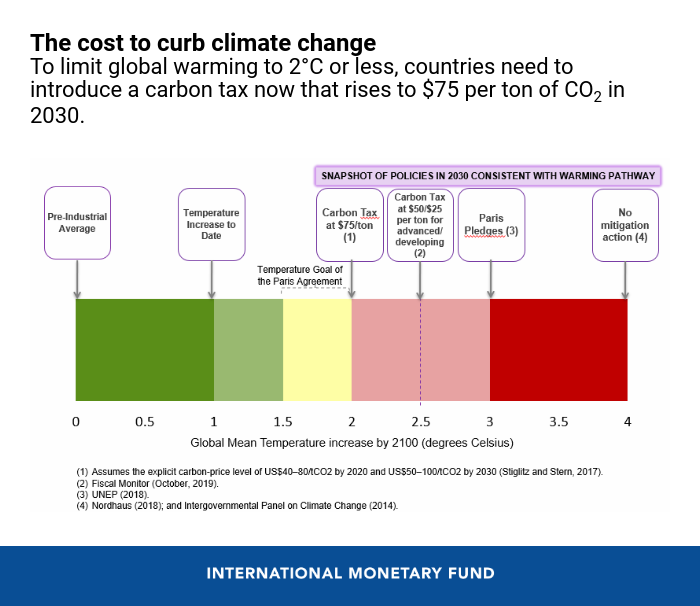 Acting individually, countries may be reluctant to pledge to charge more for carbon if, for example, they are worried about the impact of higher energy costs on the competitiveness of their industries.

Governments could address these problems with agreement on a carbon price floor for countries with high levels of emissions. This can be done equitably with a stricter price floor requirement for advanced economies.

For example, a carbon price floor of $50 and $25 a ton in 2030 for advanced and developing G20 countries respectively would reduce emissions 100 percent more than countries’ current commitments in the 2015 Paris Agreement on Climate Change. Countries that want to use different policies, like regulations to reduce emission rates or curb coal use, could join the price floor agreement if they calculate the carbon price equivalent of their policies.

Feebates are another option at policymakers’ disposal. As the name implies, in a feebate system governments charge a fee on polluters and give a rebate for energy efficient and environmentally-friendly practices. Feebates encourage people to reduce emissions by choosing hybrid vehicles over gas guzzlers or using renewable energy like solar or wind over coal.

Policies need to go beyond raising the price of emissions from power generation or domestic transportation. It is also necessary to introduce pricing schemes for other greenhouse gases, for example, from forestry, agriculture, extractive industries, cement production, and international transportation.

And governments need to adopt measures to support clean technology investment. These include power grid upgrades to accommodate renewable energy, research and development, and incentives to overcome barriers to new technologies, such as the time it will take companies to efficiently produce clean energy.

The world is looking for ways to foster investment and growth that create jobs. What better way to do it than investing in clean energy to both slow and adapt to climate change. The transition to clean energy may seem daunting, but policymakers can act to change the current course of climate change. As Nelson Mandela once said, “It always seems impossible until it is done.”