Uganda plans to hold roadshows for the second licensing round for the five oil blocks located in the Albertine Graben that has attracted international oil companies.

According to the Manager, Second Licensing Round and the Ag. Commissioner for the Upstream Petroleum Department in the Ministry of Energy, Frank Mugisha, promotional road shows will be held in London on 14th October, Houston on 17th October and Dubai on 22nd October 2019.

Mugisha said the road shows would be organised by M/s Schlumberger Oil Field Services and will provide a platform for government officials to deliver presentations and exhibition on the prospects of the blocks, legal and regulatory framework, data availability, commercial and fiscal aspects and requirements for the pre-qualification, among others.

The licensing process has three main stages namely; Request for Qualification (Prequalification), Request for Proposals (Bidding) and Negotiation. Local and International Companies have an opportunity to participate in the Prequalification stage either single handedly or through joint ventures provided they submit in their applications before 22nd November 2019. The pre-qualified applicants will then be issued with the bidding documents and also required to identify area (s) of interest. 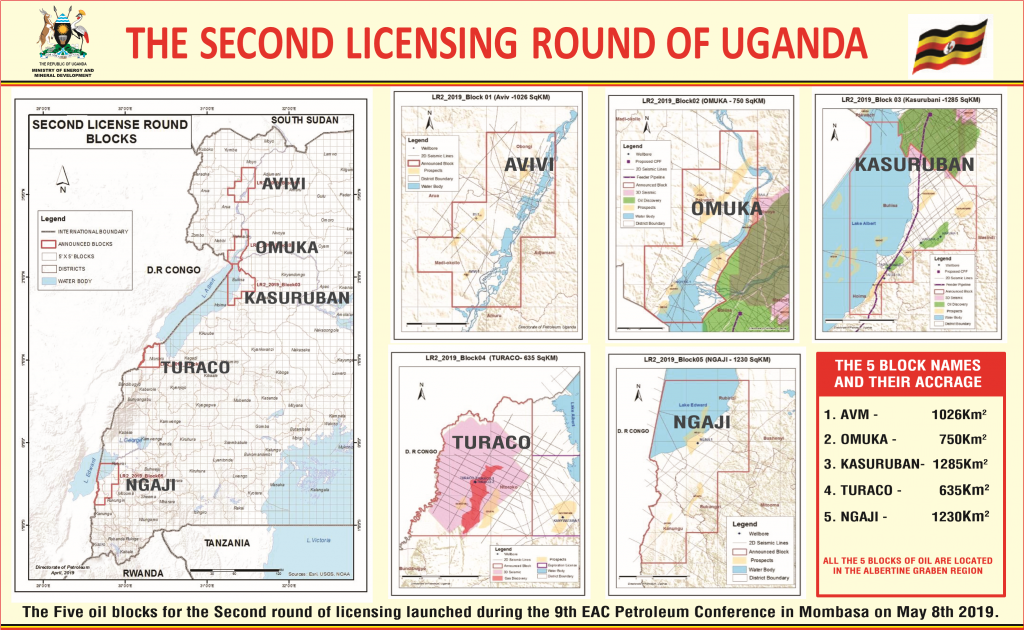 According to the Permanent Secretary Ministry of Energy, Robert Kasande, “The Second licensing round comes at a time when the country is progressing into field development and production of the already confirmed oil reserves. The PS says that the produced oil will be commercialized through the Refinery and East African Crude Oil Pipeline which are both under development. Therefore, development and production of any confirmed reserves from the new blocks will find infrastructures and evacuation routes to the markets already in place.”

The activity schedule runs as: Closing date for receipt of Applications for Qualification is November 22, 2019, Evaluation of Expressions Applications for Qualification is November 25-December 16, 2019, Display of Qualified Applicants is December 19, 2019 while the Issue of Request for Proposal/ bidding document to qualified applicants takes place from January 6-10, 2020.

The Second Licensing Round road shows come at the time when government and oil companies Tullow Oil, Total and CNOOC are entangled in tax negotiations for the first three oil blocks in the same Albertine Graben.

A series of transactions took place in 2010-2012 whereby Tullow acquired 100% of the three licences before farming down a third of the equity to both CNOOC and Total. The transaction was for a total consideration of $2.9bn and effectively unitised the basin equally between all three parties ahead the basin development.

In January 2017, Tullow announced that it had agreed a substantial farm-down of its assets in Uganda to Total. Under the Sale and Purchase Agreement, Tullow agreed to transfer 21.57 per cent of its 33.33 per cent interest in Exploration Areas 1, 1A, 2 and 3A in Uganda to Total for a total consideration of $900 million. CNOOC Uganda Limited (CNOOC) subsequently exercised its pre-emption rights under the joint operating agreements to acquire 50 per cent of the interests being transferred to Total on the same terms and conditions.

In August 2019, Tullow announced that this farm-down was terminated, following the expiry of the Sale and Purchase Agreements (SPAs). The termination of the transaction was a result of being unable to agree all aspects of the tax treatment of the transaction with the government of Uganda.
Tullow Oil has now initiated a new sales process to reduce its 33.33 per cent Operated stake in the Lake Albert project.