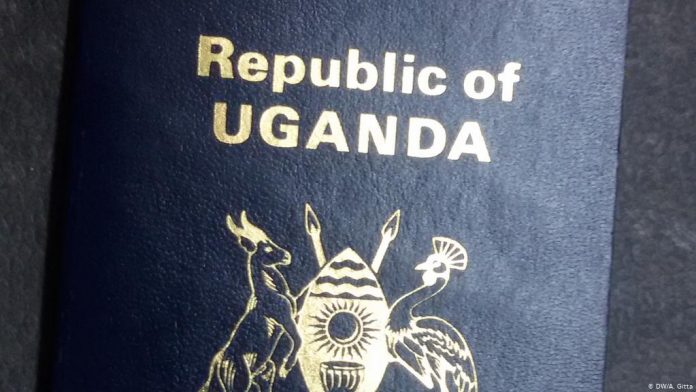 Ugandans living and working in South Africa will now be able to apply for and receive national IDs and passports from the country, Ugandan envoys have said.

Originally Ugandans have had to travel back home to apply for and receive the documents, as obtaining the newly introduced East African passport requires one to have a National ID, only issued in Uganda.

“In collaboration with the National Identification and Registration Authority, we brought ID registration services nearer to you. However, we are dismayed by some of you who are bent on de-campaigning this noble cause,” said Barbara Nekesa, Uganda’s High Commissioner to South Africa.

Nekesa was speaking on the occasion to mark Uganda’s 57th independence anniversary held at the Uganda High Commission in Pretoria, South Africa.

The event was attended by Uganda’s representatives to the Pan African Parliament, Morris Ogenga Latigo and Felix Okot Ogong and Parliamentary Commissioner, Francis Mwijukye and over 100 Ugandans living and working in South Africa.

Nekesa said Uganda was only one of the few countries that issue passports at selected missions, with citizens of other countries having to return home to secure the document.

“As a Mission, we elected to ignore them, for it is them who will suffer the consequences of not having legal ID. There are many other areas where we can work together to solve whatever problems we may have,” Nekesa said adding that “Those who have approached us can testify that we are always available to render service to whoever walks into the Mission irrespective of colour, faith, tribe, political affiliation.

Officials said that NIRA, the agency charged with issuance of the IDs, had agreed that Ugandans in South Africa would fill the required forms through the embassy, which information would be transferred to Kampala for printing of IDs.

The officials said they had also resolved the issue of the requirement for LC1 and DISO signatures, as association chairpersons and embassy officials would help confirm one’s citizenship.

Mr. Joshua Kivuna, the Minister Counselor, said Mission staff had been trained on how to capture data for issuance of IDs, which would be issued in Kampala upon transferring of the captured information. The officials would collect the IDs and pass them on to the applicants from the Mission in South Africa.

He however said that several Ugandans were against registration as they claimed providing their data exposed them to arrest by government.

Kivuna also said that although NIRA had promised that the first batch of IDs would be issued in three months, this had not happened yet.

“There has been a delay in the transfer of data. The IDs will come; we pray for some patience, and hope they will be delivered soon,” he said.

Ms. Irene Jogole, who was posted to the Mission this month as the Immigration Attaché, said she was starting with assessing how to re-start processing and issuing passports to Ugandans in the country following the recall of the old passports for the new East African ones. She also said that the Mission will be in position to issue visas to persons holding South African passports wishing to travel to Uganda.