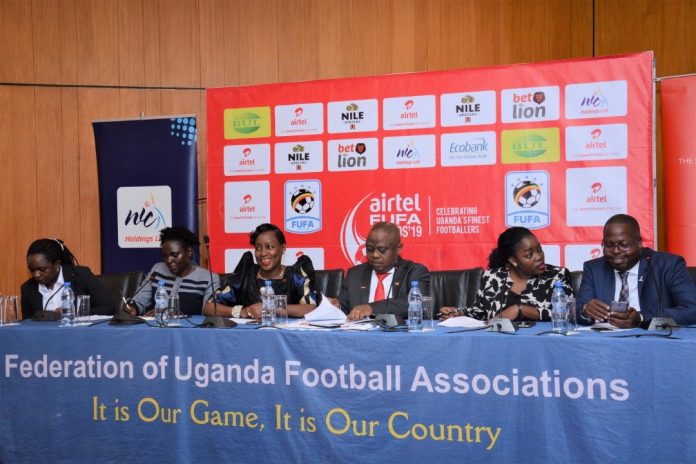 The 2019 FUFA Awards have been officially launched at the Serena Hotel in Kampala on Wednesday morning.

The launch at Serena was attended by the Acting FUFA President Justus Mugisha, FUFA Executive Committee members, Sponsors and partners.

New Categories have been added from the previous awards are these are; Airtel – FUFA Best XI 2019 (Women), Airtel – FUFA Women Football Coach of the Year, Best Squad (Club/National Team) of a particular Year, FUFA Member Associations’ Award and the Team Fans of the Year (FUFA Competitions).

“In 2013, we thought we could take Uganda’s football higher. We presented our manifesto and it was accepted by the stake holders who endorsed it. In 2014, we transformed the manifesto into a five year strategic plan with the vision of being the number one footballing country on and off the pitch,” said the Acting FUFA President Justus Mugisha.

The awards gala shall be held on Saturday, 14th December 2019 under the theme “Celebrating Uganda’s footballers”.

“We are here excited for the fifth year running to unveil the awards where we recognize the best of talents. Objective of these awards is to reward excellence. We also recognize those that have built a strong foundation to
the game.” Rogers Byamukama, FUFA Executive Committee member and Chairperson Airtel FUFA Awards Committee said.

*Nominees for Airtel FUFA Male Player of the Year 2019*

*Nominees for Airtel FUFA Team Fans of the Year 2019*

*Nominees for Airtel – FUFA Female player of the Year, 2019*