Veteran musician and heiress to the family Angela Katatumba has been charged with criminal trespass and fraud and is to be brought to Chief Magistrate Court Makindye on November 4, 2019.

According to charge sheet, Ms Katatumba is needed to answer the above charges which police preferred on her.

The Katatumbas have had trouble with city businessman man Mukesh Shukla popular known as Shumuk over the ownership of city properties.

However, Eagle Online has learnt that Ms Katatumba’s prosecution is a private prosecution since it a joint one involving three parties. The three main complaints are Mr Mukesh, Barclays and the Pakistan Association-Uganda. 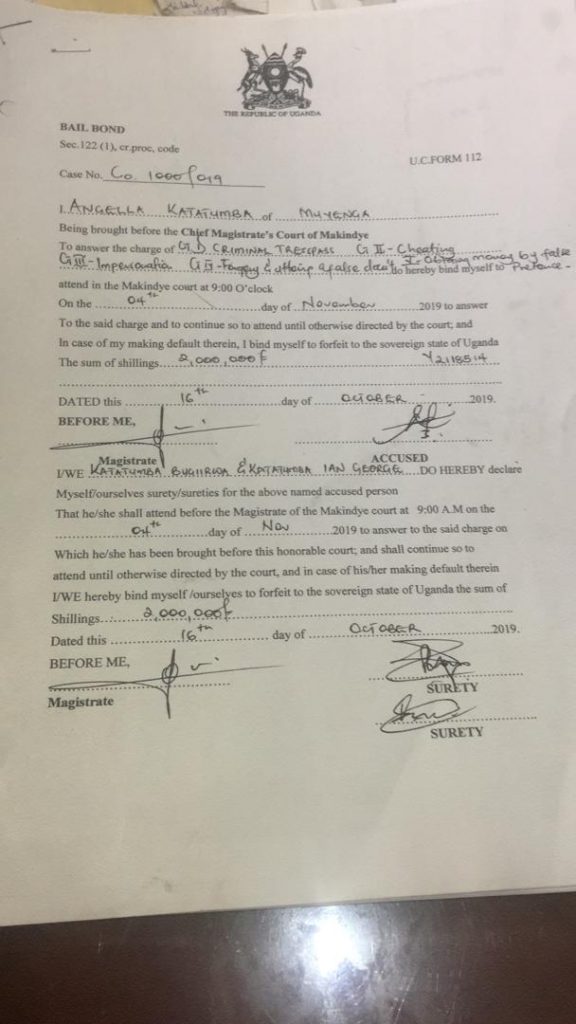 How her troubles started

The High Commission for the Islamic Republic of Pakistan based in Nairobi last year dismissed Angelina Katatumba as the Consular in Uganda describing her as fake.
In a public notice, the Commission said ever since Bonny Katatumba died, their government had never appointed any representative to Uganda as a Consulate and thereafter, the Pakistan government replaced her with former Minister Lukia Nakadama.

“The High Commission for the Islamic Republic of Pakistan in Nairobi presents its complaints to the Ministry of Foreign Affairs, Uganda and all the Diplomatic Mission/Consulates/Honorary Consulates in Uganda and has the honour to refer to the latter’s Note verbal of even number dated October 25, 2017. The so-called Honorary Consulate of the Islamic Republic of Pakistan in Uganda is still operating illegally in Uganda. It had actually been ceased to function with the demise of our Honorary Consul Mr Bonny Katatumba , Government of Pakistan has not yet appointed a new Honorary Consul in Uganda.” The complaint to Ministry of Foreign Affairs Uganda reads.

The High Commission further warns the Ugandan authorities especially Immigration officials not to honour any documents purportedly issued in the name of the Consulate.
“This High Commission has further honour to inform the Honorary Consulate of Pakistan currently operating in Uganda under Angelina Katatumba is fake and fictitious and has no legal authority at all”