Commonwealth Development Corporation (CDC) Group of the United Kingdom that own 9 per cent of the shares in Dfcu limited has announced that it will exit the company after accepting to sell its shares to an external investor, Eagle Online understands.

“Dfcu limited…advises its shareholders and the general public that a significant minority shareholder has received and accepted an expression of interest for the purchase of its shareholding in the Company by another,” Dfcu said in a recent cautionary announcement.

The company however, warns that if successfully concluded, the transaction may have material effect on the price of the company’s shares.

But the transaction, according to the announcement, remains subject to obtainment of regulatory approvals and satisfaction of all conditions precedent.

Due to expected sell of shares by the unnamed minority shareholder, the company has therefore advised shareholders and potential investors to be cautions when transacting in the company’s shares. “Shareholders and potential investors are advised to exercise caution when dealing in the Company’s shares until a further announcement is made,” the announcement reads in part.

Eagle Online  last year last year reported that UK’s Commonwealth Development Corporation (CDC) Group was looking for another offshore company to buy its shares in Dfcu. The company owns 9.97 per cent. CDC’s Investment Director Irina Grigorenko wrote a confidential letter to Dfcu Chairman Elly Karuhanga of CDC Group’s intention to sell some or all of its shares.

Grigorenko, said then that CDC Group was “undertaking a review of its investment in DFCU Limited which may lead to the disposal or some of some or all of its shares in DFCU over the short to medium term.”

When asked, analysts said it is normal for shareholders to sell their shares within or get buyers from outside when they think it is the right time to exit. However, he hastened to add that some shareholders exit when they anticipate that the company’s business in future might not be profitable at the level they want it. 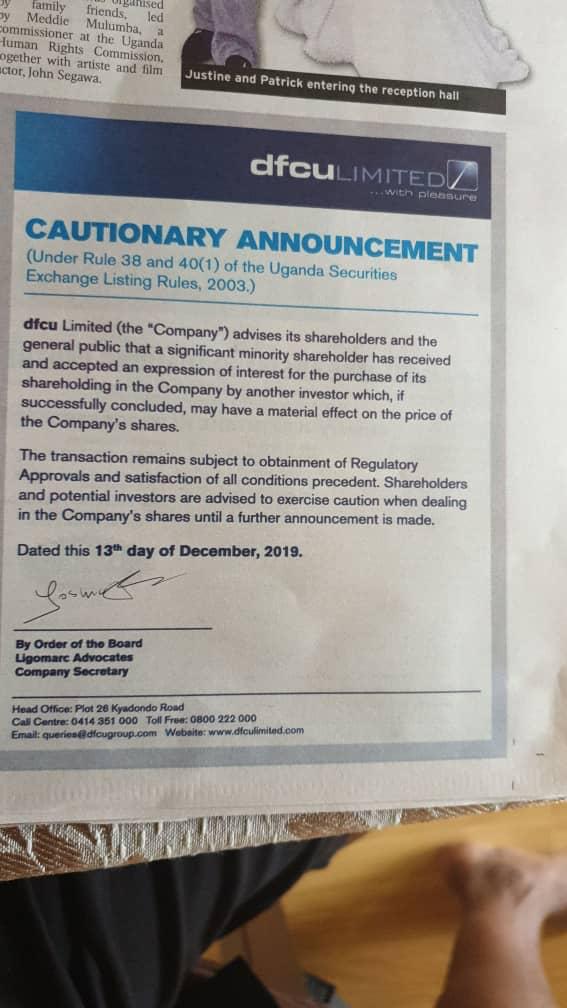 However, the latest announcement that a significant minority shareholder wants to exit Dfcu comes at the time when Dfcu is facing challenges following the controversial acquisition of Crane Bank Limited (CBL) in January 2017. Dfcu is the holding company of Dfcu Bank which bought CBL as offered to it by the Bank of Uganda (BoU).

Recently Dfcu bank realised that it could not take up freehold properties of Meera Investments Limited which had been leased to defunct CBL. Dfcu now wants BoU to compensate it for the loss of the properties it values at Shs47 billion even though it is understood it valued the same properties at Sh10 billion when it took over CBL an estimated Shs200 billion.