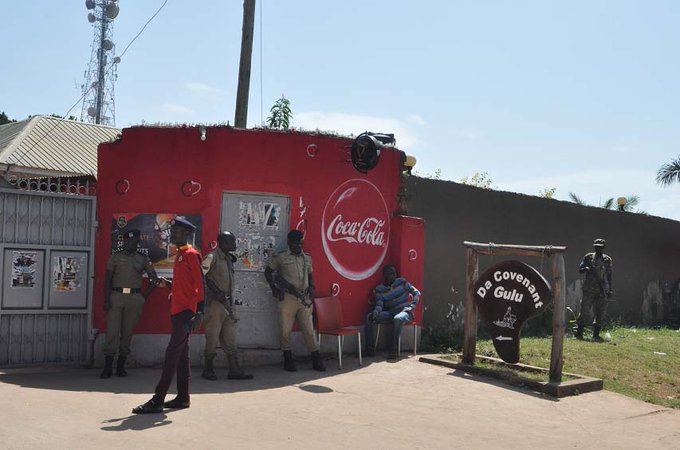 The consultation meeting for the People Power party pressure group led by  Robert Kyagulanyi was again blocked in Gulu town as heavy police and army was deployed in town and at the covenant where the meeting was supposed to take place.

Despite being cleared by the country’s Electoral Commission to carry out a countrywide consultative meetings ahead of 2021, the Gulu meeting being the second to the one of Kasangati was blocked by police and other security agencies.

The advance group that was led by the Mityana Municipality Francis Zaake was blocked from accessing the ground with claims that they did not meet the pre requisites to hold such meeting.

That blockage made Zaake and other People Powers pressure group members to hit the Gulu town street while marching to Acholi Road were, they later  dispersed anti-riot police before disappearing in town.

Zaake said they met all the necessary requirements and guidelines to conduct the consultation but were still blocked.

“The District Police Commander is scared of me, I don’t even have a stone not even equipped with knife or panga, we are law abiding citizens ‘’ Zaake said.

Mr. Samuel Obedgiu one of the youths revealed they have been locked out from accessing the place and at the same time been threatened and brutally harassing them.

One of the People Power members who requested anonymity because he he feared to be named expressed that they cleared everything with the security and hotel owner but were astonished about seeing the security agencies locking them out from accessing the venue on entrance.

Mr. Alex Javuru the Field Force Police Commander in Gulu said the pressure group did not meet and fulfill the requirement for the consultation and therefore, they should go back and consent a letter then later they can hold the meeting.

Eagle Online couldn’t get a comment from Gulu District Police Commander  Mr. Emmanuel Mafundo as he was hiding inside the venue that was supposed to be accessed by the pressure group for the meeting and at the same time, his phones were switched off.

Yesterday, Jimmy Patrick Okema the Aswa Region Police Publicist while addressing Journalists from the northern Uganda Media club in Gulu town, Told Journalists that the police was not notified on the said consultation.

This is the second time in a row that the consultation meeting for Robert Kyagulanyi is being blocked in Acholi sub Region after facing the same similar idea was blocked in Kitgum before planning to have it in Gulu.