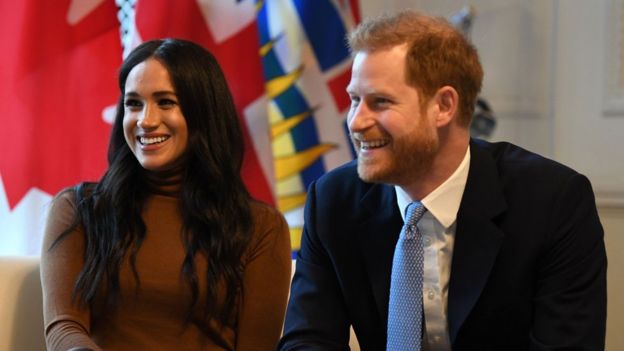 The Royal Family are said to be “hurt” at the Duke and Duchess of Sussex’s announcement they will step back as senior royals.

Prince Harry and Meghan did not consult any senior royal about making the statement, it is understood.

Buckingham Palace was “blindsided”, said BBC royal correspondent Jonny Dymond, as talks about their future had begun but were in very early stages.

The Palace said there were “complicated issues” to work through.

In their statement on Wednesday, Harry and Meghan said they made the decision “after many months of reflection and internal discussions”.

They said they intend “to step back as ‘senior’ members of the Royal Family, and work to become financially independent”.

They plan to split their time between the UK and North America, while “continuing to honour our duty to the Queen, the Commonwealth, and our patronages”.

“This geographic balance will enable us to raise our son with an appreciation for the royal tradition into which he was born, while also providing our family with the space to focus on the next chapter,” the couple said.

Despite the couple’s decision, Harry will remain sixth in line to the throne.

The pair was already preparing to launch their own Sussex Royal charity, which they set up after splitting from the Duke and Duchess of Cambridge’s foundation in June last year.

The Sussexes’ new charity is expected to be global, linked to Africa and the US, rather than domestic – and will have a commitment to female empowerment.

It was revealed in December the couple had made an application to trademark their Sussex Royal brand across a string of items including books, calendars, clothing, charitable fundraising, education and social care services.

Meghan, of course, is American herself and has a particularly close relationship with her mother who lives in California.

But the Sun, which broke the story on Wednesday, was firm in its speculation that Canada was their likely destination.

The couple have just returned after a six-week break from royal duties, which they spent in Canada with their eight-month-old son, Archie.

After returning to the UK on Tuesday, Harry, 35, and Meghan, 38, visited Canada’s High Commission in London to thank the country for hosting them and said the warmth and hospitality they received was “unbelievable”.

Former actress Meghan lived and worked in Toronto for seven years during her time starring in the popular US legal drama Suits.

She has previously spoken about adopting the city as her second home after her native Los Angeles, and she she has several Canadian friends.

Jessica Mulroney, a close friend of the duchess, posted a quote on Instagram about a “strong woman” facing a challenge.

The Canadian stylist and TV star wrote: “A strong woman looks a challenge in the eye and gives it a wink.”

The couple’s announcement raises numerous questions over what their future royal roles will entail.

How will they become ‘financially independent’?

In stepping back as senior royals, Harry and Meghan have announced they will no longer receive funding from the Sovereign Grant.

The Sovereign Grant is public money which pays for the cost of official royal duties, in exchange for the surrender by the Queen of the revenue from the Crown Estate.

The couple said the Sovereign Grant paid for 5 per cent of their official office from 2019, with the remaining 95 per cent being funded by Prince Charles through his income from the Duchy of Cornwall.

Under current rules, the pair said they are “prohibited from earning income in any form”, but in their new roles could follow other title-holding royals in having full-time jobs.

The costs of official overseas visits will be funded by the Sovereign Grant and contributions from the host country “when appropriate”.

The couple are classified as “internationally protected people”, which means they must have armed security provided by the Metropolitan Police.

They will retain Frogmore cottage, the Grade-2 listed property in Windsor that cost taxpayers £2.4m to renovate, as their official residence so they have a “place to call home” in the UK.

What do commentators say?

Bryony Gordon, a Daily Telegraph journalist who knows and has interviewed the couple, suggested their decision could be linked to their mental health, after becoming a “punching bag” for a “misogynistic and racist” nation.

In 2017, Ms Gordon interviewed the prince for her Mad World podcast in which he revealed he sought counselling while struggling in his late 20s to cope with the death of his mother.

Speaking to Emma Barnett on BBC 5 Live, she said: “Here is a man who everyday has to live out the trauma that he experienced as a little boy when he had to walk behind her coffin at the age of 12 in front of the world, and I think if any of us were put in that situation we would find it incredibly triggering.”

She added the couple had become a “punching bag for a nation that is still sort of deeply misogynistic and racist” and they were “entitled” to “do what is best” for their family’s mental health.

She believes the couple will carry on exactly as before “but just for free”, as they’re “sick of the scrutiny” that comes with taking public money.