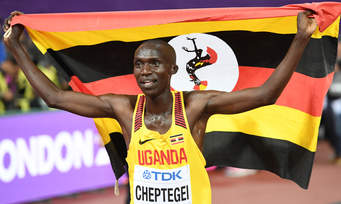 The Inspector General of Police (IGP) Martins Okoth Ochola has congratulated Inspector of Police (IP) Joshua Cheptegei, for his remarkable world record in the five kilometres race at the Herculis Monaco Run.

Cheptegei won the race in 12 minutes 51 seconds breaking Sammy Kipketer mark of 13 minutes that was set a decade ago.

“We are incredibly proud of him, for earning himself, the police and the country a world record.  His continuous accomplishments at the World Stage are a testament to his discipline, drive and determination to reach the highest level in the sports, placing him in the history books of the Police.” he said

He said Cheptegei’s victory will certainly boost the young group of talented, powerful and determined athletes in the force, who seek to excel in the field and at the World stage.

Cheptegei is the four-time winner of the Zevenheuvelenloop 15 km road race in Nijmegen, Netherlands. In 2018 Cheptegei set the world record for a 15 km road race. He finished in 41:05 and improved the world record by eight seconds, formerly set by Leonard Komon at the Zevenheuvelenloop in 2010. Abrar Osman finished second with 42:34 and the 2017 5000 m world champion Muktar Edris placed third with 42:56.

Cheptegei was the winner of the senior men’s race at the 2019 IAAF World Cross Country Championships in Aarhus, Denmark. He won in 31:40 on the 10.24 km course. Ugandan teammate Jacob Kiplimo finished second in 31:44. As Thomas Ayeko placed 7th and Josehp Ayeko tenth, Uganda won the team first place title.

And yesterday  he set a new five kilometres world road race record in Monaco with a time of 12:51. The previous record was 13:22 set by Robert Keter on November 9, 2019 in Lille, France.