The Internet Service providers of Uganda have written to the Ministry of ICT  protesting the new fees and fines structure that was imposed on them last year.

The ISP is one of the longest serving internet providers within the country, having started its work as early as 1990 to date and they believe that the new Uganda Communication Commission (fees and fines) regulations 2019, is unacceptable and would only serve to hinder their services.

The Chairman of the ISP, Mr, Godfrey Sserwamukoko wrote to the Ministry of ICT seeking for a review of the fines and regulations imposed on them without any consultations and further requested for government to distinguish Internet providers from major telecommunication companies such as MTN and Airtel. Within the letter are various risks highlighted by the chairman should the government continue with the new proposed fines and regulations.

In the letter, the increment of the fees is described as ‘exorbitant’, ‘unreasonable’ and ‘out of the true state of the earnings of the ISPAU membership collectively.’ The ISP also believe that such fines would affect the community since such a levy will generate an increase in the price of data mbs despite the ISP having reduced the prices from $4000 per mb in 2006 to to $3 per mb currently. Furthermore, such a levy would contradict the National Broadband Policy 2018 that seeks to include a wider compass of Ugandan internet users through digital inclusions and universal awareness under the Uganda 4040 vision bracket.

Although the new fees and regulations have not been effected, before the end of his tenure, Mr, Godfrey Mutabazi, the Exectuvie Director, Ugandan Communications Commission, assured the ISPUA that the matter would be looked into and asked for a certain period of time to review the new regulations proposed and thereafter would meet with the concerned parties and stakeholders to see how they could forge away forward.

This is not the first time the government has been called out for its irregular taxation of individual businesses after it was discovered that while MTN was recently forced to cough a whopping $100 million(Shs 350 billion) in taxes other telecommunication companies such as Airtel only released $1090,000(350 million) to operate within the same jurisdictions for same period of time (10 years). 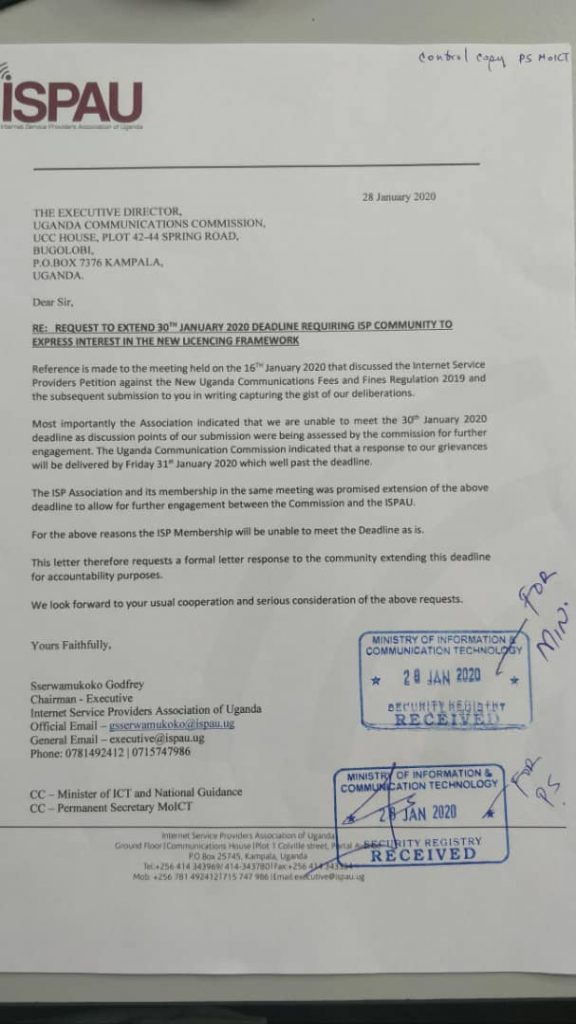 Eagle Online has learnt that MTN-Uganda isn’t against the payment of $100 million but they argument is that they are willing to pay that money give that duration is increased from 10 years to 20. According the inside sources, MTN has proposed that this same amount should apply across board on other similar service providers.

“Why would they expect us (MTN-Uganda) to pay that amount when Airtel on paid $100,000 for same duration and yet Airtel as well operates across the country like we do? Secondly we also appeal to authorities that we shall pay that money on similar date like others because if it is not then, that means they are discriminating.” a source said.

The ISP maintains that an increment in the taxes would not only cause huge losses since the population of internet users would not be able to support it and this will further scare away any future investors in the I.T sector.

Two weeks president held a meeting with both MTN representatives and Mutabazi before he was sacked where the issues came.