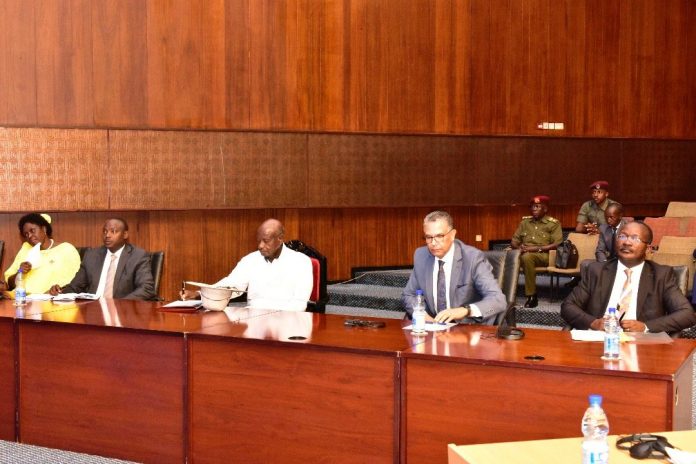 President Yoweri Museveni has urged leaders in the water sector to deal with water issues in a holistic manner so as to create long lasting and effective global solutions to water challenges and threats.

“Issues of water cannot be talked about in a fragmented way. For instance, in such a conference, the Minister of Health should be in it because water also affects the country’s health”

AFWA is a professional association  established, enterprises and utilities operating in the areas of drinking water, sanitation and environment in Africa with over 100 utilities’ members from over 40 countries across Africa.

It holds an international congress and exhibition every two years to enhance the exchange of ideas and recent developments in the sector of water and sanitation. The last congress took place in the Malian Capital of Bamako in February 2018.

President Museveni, who launched the ‘Sustaining High Performing Public Enterprises’ book written by Dr. Silver Mugisha, the new president of AFWA, noted that one of the efforts necessary for water development and sustainability was the need to rightfully preserve the resource.

“Water is life. In order to use it, we must preserve it first. If we interfere with the local wetlands, we will be interfering with the rain. We must, therefore, recover those wetlands that have been encroached on,” he stressed.

He further noted that for water preservation to be done right, there was need for the African society to metamorphose from a primitive subsistence agriculture which made peasants encroach on wetlands as they looked for more land, to embracing industrialized system.

He reiterated that the African Water Congress should support the idea of leaving 500 meters of natural vegetation around the shores of water bodies to prevent silting and algae as well as bringing about fresh water. He also added that it would be difficult and costly to provide clean water to the population if the preservation was not done right.

Regarding the issue of increasing water in Africa, Museveni noted that there was need to embrace advanced levels of technology in order to intensify the efforts of removing salt from sea water to supply it at low costs. He advised the Congress to always advocate for the use of clean water, which he noted, prevents all water borne diseases.

He stressed to the African Water Ministers in the River Nile Region that there was no need to fight over the waters of River Nile because there are other alternative sources of more water supply.

State Minister for Water, Ronald Kibule, said that Uganda’s hosting of the Congress was a clear indication of the country’s tremendous achievements in the water sector. He expressed happiness to note that Uganda earns Shs3 billion every year from offering water consultative services to some African countries on account of the country’s success in water management.

The outgoing President of AFWA, Eng. Abderrahim El Hafidi, who handed over the instruments of power to new AFWA Dr. Mugisha Silver, noted that the Congress was highly relevant for the prospective African Vision of water and was a fulfillment of the United Nations’ Sustainable development goal 6 that called for clean water and sanitation for all people.

He also noted that the Board of AFWA had requested Uganda to host and establish the African Water and Sanitation Academy using the Uganda National Water and Sewerage Corporation (NWSC) as the utility.