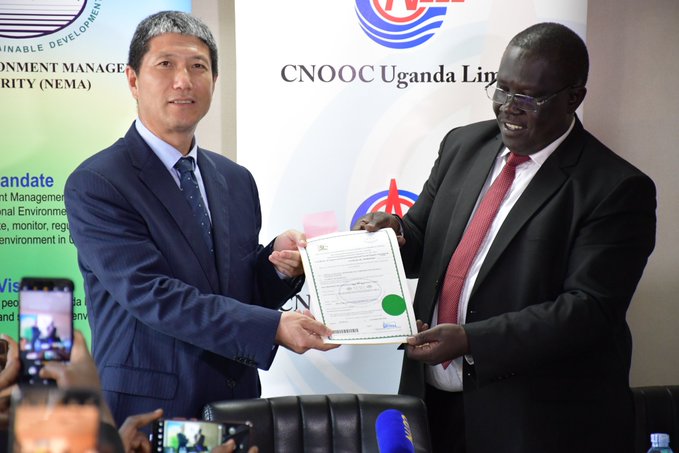 The certificated has been granted by the Executive Director of National Environment Management Authority (NEMA) Dr. Tom Okurut after a comprehensive assessment undertaken to identify the social and environmental impacts of a project as well as the measures to reduce the impacts and maximize the benefits.

On September 16, 2013, CNOOC Uganda Limited, the operator of the Kingfisher project, received a production license from the government of Uganda. The company then embarked on ESIA process for the on-site construction of the Kingfisher Oil Field facilities like the Central Processing Facility, Camps, Yards and Parking areas, Feeder Pipeline among others.

According to Dr. Okurut, the ESIA focused on Social, Health, Safety and Environmental aspects such as air quality, noise and vibration, hydrology, surface water, waste, biodiversity among others. Data was collected and impact assessment of activities undertaken.

In accordance with the provisions of Part X of the National Environment Act No.5 of 2019, NEMA subjected the KFDA ESIA to a review process that also revealed concerns that required CNOOC to address before a final approval decision could be made.

“It is from this background that CNOOC Uganda Limited made revisions in line with the detailed review findings that were issued by NEMA for making necessary improvements on the ESIA. After considering all the required revisions, CNOOC Uganda Limited resubmitted the KFDA ESIS on 18th November, 2019 for the final approval decision to be made.” He said adding that all issues were addressed by CNOOC Uganda Limited to NEMA’s satisfaction hence culminating into the award of the ESIA certificate.

“We are pleased to issue this certificate in line with the principle of sustainable development. NEMA shall continue to maintain an efficient mechanism for sustainable environment and natural resource management,” remarked Dr. Tom Okurut, the NEMA Executive Director.

­­ Mr. Zhao said CNOOC Uganda Limited is committed to the efficient and effective development of the oil resource in an environmentally friendly and sustainable manner.

“CNOOC Uganda Limited ensures strict adherence to the regulations and guidelines and clear commitment to apply international best practices to the development of the oil resources, particularly the International Finance Corporation (IFC) Performance Standards, also known for being the most stringent standards on environment and biodiversity.” He said