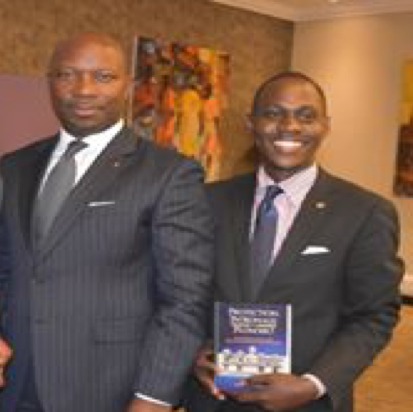 I greet you in the name of our lord Jesus Christ. By way of introduction, my name is Batanudde Kiwanuka, I live in Mukono, Kyaggwe County. I will be 74 years old this September. Regardless of my age, I am a very active person on social media. I also read newspapers a lot, what else do you do in retirement anyway?

I have received the news that the Uganda Police got interested in your writings and that they arrested you to explain your allegation that the Kabaka received a bribe from President Museveni. I had read your article and I was saddened by what you published. In our days, nobody said such things about the Kabaka especially when the allegation looked as far fetched as yours.

Today, I couldn’t believe my eyes when my son in New Jersey sent me a screenshot of Owek Apollo Makubuya’s tweet in which he denied that you work for him. I thought it was photoshop so I did a search and it was all there. In case you missed the tweet, Owek Makubuya says you last worked for him 3 years ago. In my small study, I have a book called Protection, Patronage or Plunder? written by Owek Makubuya which was published in 2018 in which he acknowledged you for the great job you did for his book.

Just in Novermber last year, Owek Makubuya organized an event to commemorate the 50th anniversary of Ssekabaka Edward Muteesa II’s death. This was on November 18, 2019. You were in attendance at the Sheraton. I was there too. I saw you moving aroung the ballroom, sometimes issuing orders to hotel staff and running to Owek Makubuya to get instructions. I remember Owek Makubuya talking glowingly about you and your capabilities as his personal assistant. He didn’t stop there, he acknowledged you in the pamphlet that was published as a result of this event. You can check Page VIII of the pamphlet with the title Sir Edward Frederick L. Mutesa II: Reflections on the Triple Heritage of an African King, Knight and President by Apollo N. Makubuya.

But Owek Makubuya has denied you at your first real time of need. When you need somebody of his caliber and connections to get you out of trouble. He is President Museveni’s Advisor on Covid-19, he can easily call the president and they let you go. But he said he doesn’t know you, just six months of him praising you publicly as an able lieutenant. He said you last worked for him 3 years ago. In November 2019, you helped organize an event that helped him shine! Museveni was there. You may even have shook hands!

And let me tell you Jonathan, you are now too soiled for Owek Makubuya’s ambitions. Him acknowledging you that you work for him today as he did 6 months ago would indicate that he may have approved the missive you published about the Kabaka and the President—the two masters Owek Makubuya shamelessly serves. You were a pawn in a game of chess. He doesn’t need you anymore yet you need him the most. That is how politics works. You were too naïve and perhaps too young to allow yourself to be used. 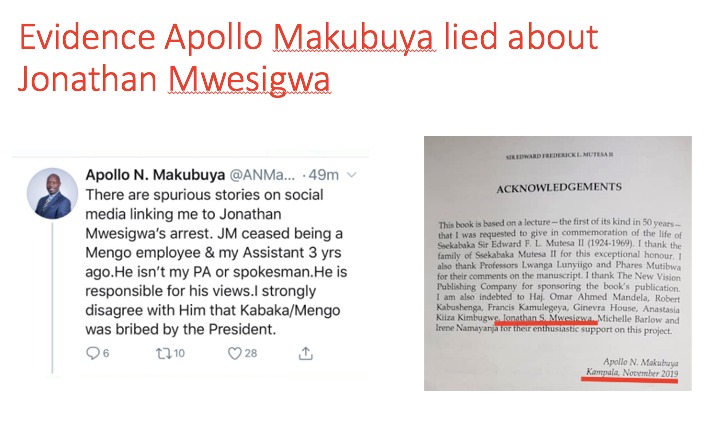 Your legion of fans who applauded, liked and shared every post that you wrote making one allegation after another about the kingdom are also silent. Some even say they saw this coming just as Owek Makubuya says now. They can’t even bring you water! Should this be a long legal battle, you will know who your friends are—you already know Owek Makubuya isn’t one of them. He denied you already in broad daylight on a platform that has a global audience and he did that in less than 140 characters. You aren’t even worth a Twitter Thread or a letter. Less than 140 characters and you no longer matter. At least Judas denied Jesus deep in the night using darkness as his cover. Owek Makubuya told the world in broad daylight!

I will write to you another letter soon focusing on your boss, Owek Makubuya’s pet subject—federalism, which you had even tried to co-own, publishing similar pamphlets forgetting who was boss.