The High Court in Jinja is set to commence on the hearing of an application filled last Wednesday May 13, 2020 by the embattled Jinja RDC, Joseph Erick Sakwa in which he sought a judicial review, challenging the manner in which he was interdicted on May 4. The hearing started today at 11:00am.

Judicial Review is the remedy under which a person dissatisfied with an administrative decision proceeds to challenge the same before the Court of competent jurisdiction. This is provided for under Article 42 of the Constitution and the Judicature Act.

In Judicial Review applications, the aggrieved citizen challenges not the decision but the procedure and manner in which the same was arrived at.

In his application where the Attorney General, William Byaruhanga and the Secretary to the Office of the President, Hajji Yunus Kakande are the respondents 1 and 2 respectively, Sakwa is praying for cancellation of his interdiction from office issued by 2nd respondent.

According to the court papers seen by Eagle Online, Sakwa also challenges the procedure Kakande purported to follow.

In the affidavit, Sakwa says he is a political appointee and not a civil servant to whom the public service standing orders, which the 2nd Respondent quotes in his interdiction letter apply. 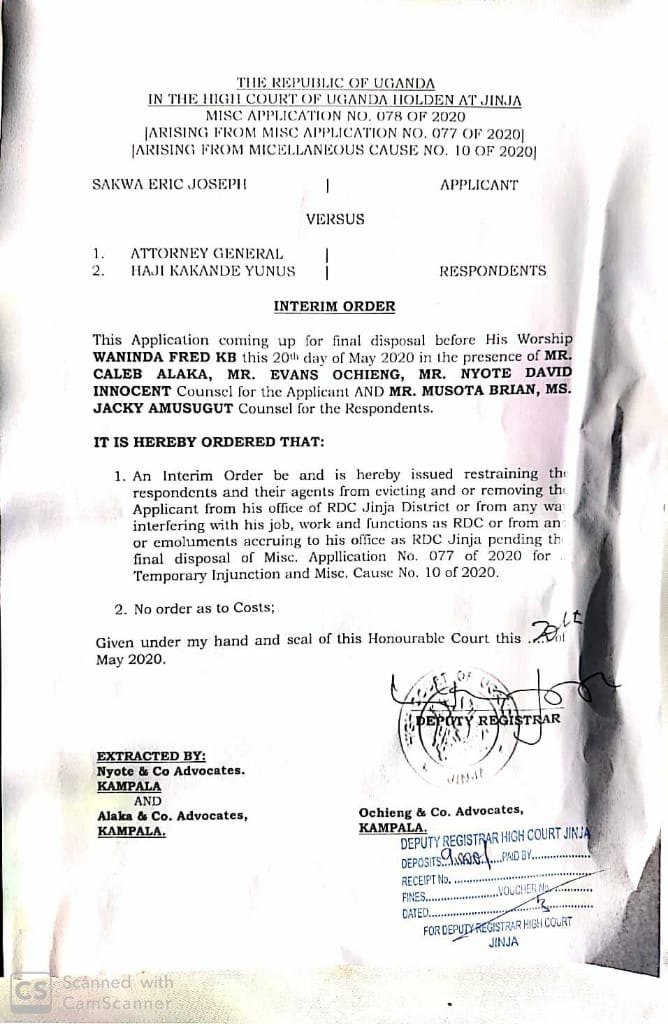 He further asserts that he is specifically governed by terms of service disclosed in his instrument of appointment under the provisions of the Local Government Act.

He says the manner in which he was interdicted contradicts the rules of natural justice because he was never heard prior to it.

According to his application, Sakwa contends that Kakande, as Secretary in the Office of the President, can only interdict him on the directive of the President who appointed and made him RDC Jinja.

The May 4 interdiction letter does not disclose anywhere that it was authored on orders of President Museveni or in consultation. Sakwa bases on this to term it as a nullity which he wants court to quash and have him fully reinstated.