City tycoon Sudhir Ruparelia has come to the rescue of Chimpanzees that were on the brink of starvation at Ngamba Island Sanctuary with a Shs10 million donation for buying food.
Ngamba Island Chimpanzee Sanctuary mainly depends on money from visiting tourists to feed the Chimpanzees, but that took a turn for the worse when the country was put on a total lockdown to prevent the spread of the Corona virus.

With no money from tourists, the Chimpanzees were on the brink of starvation until Sudhir Ruparelia came to their rescue, much to the delight of Chimp-loving Ugandans.
A Shs10 million cheque was handed over To Dr Joshua Rukundo,the Executive Director of the Chimpanzee Trust, by Ms Valentina Ajay,an executive from the Ruparelia Foundation. 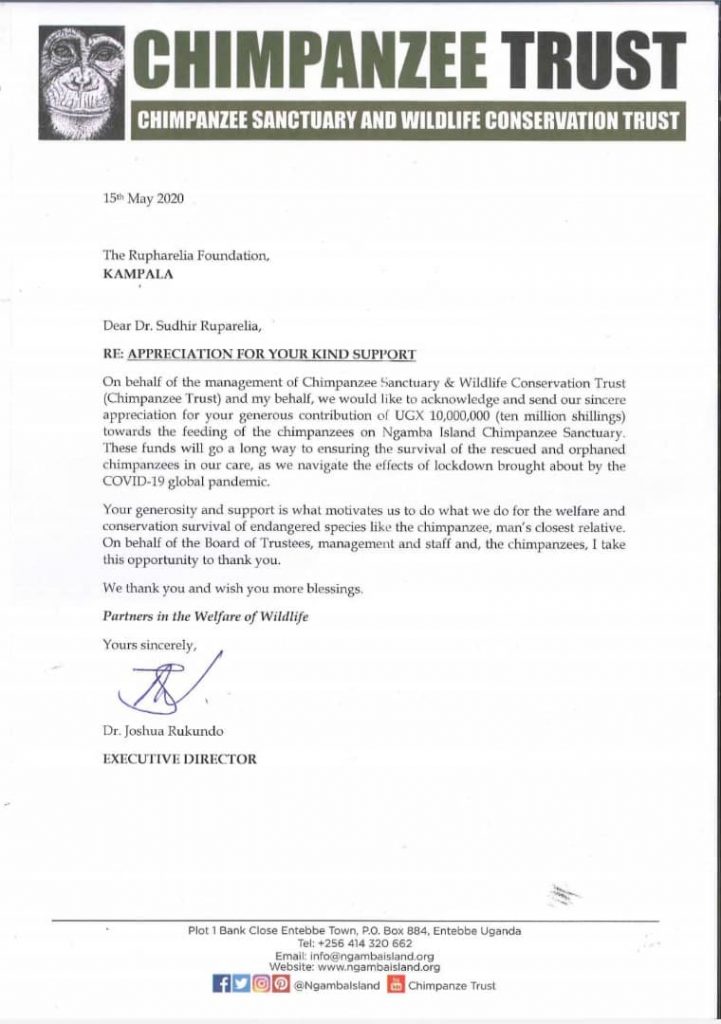 Sudhir Ruparelia has supported the Chimpanzee Sanctuary at Ngamba for the past 20 years and as the facility marked its 20th anniversary in 2018, Sudhir adopted a baby chimp that he named Ruparelia, further cementing his bond with the sanctuary.

Ruparelia has been particularly supportive to Ngamba Island as he bought the land where it seats and donated it to the sanctuary.
Staff at the sanctuary were excited that Sudhir has not forgotten his namesake-Ruparelia, the chimp, during these times of dire straits triggered by the Covid-19 pandemic.
Ngamba Island hosts over 40 orphaned Chimpanzees rescued from different parts of East Africa.