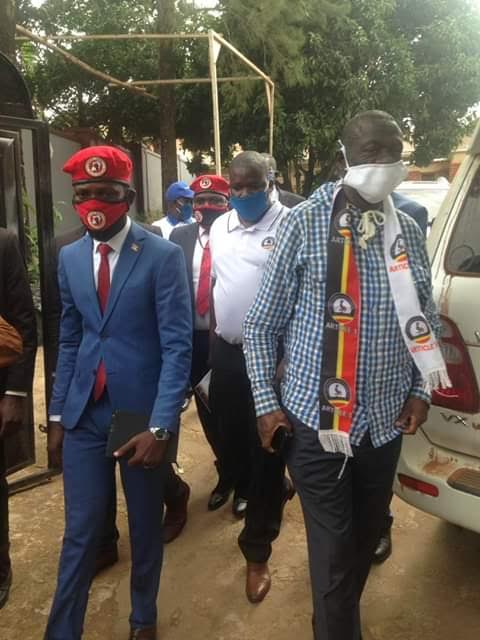 A combined unit of the Army and Police today invaded a press conference that was being addressed by opposition leader Kizza Besigye and People Power’s Bobi Wine.

The two opposition principals were addressing a press conference at Flora Hotel in Wakiso when heavily armed soldiers and Policemen invaded the hotel room.

The press conference had been called to unveil a joint defiance campaign dubbed: “no-nedda”.

Under the campaign,Ugandans were urged to either hoot or hammer saucepans during lunch to show anger at the government’s failure to provide lunch for poor citizens during the Covid-19 lockdown.

A police commander found Dr Besigye speaking and immediately ordered him to stop.

Dr Besigye defied the Police’s directives and proceeded with his address.

In his address,Dr Besigye focused on the need for change-seeking forces to unite.

“There is 1 percent of the population that is using guns to keep Museveni in power. I can assure you that they will not defeat us,”Dr Besigye said.

Bobi Wine said change-seeking forces should stop fighting each other.

“We are not enemies.Whenever we fight,we delai change and that is what people are waiting for,”Bobi Wine said.