City tycoon Ben Kavuya has again come under fire after he controversially obtained permission to fly two close relatives to Nairobi for treatment.

In a 12th June letter from the Ministry of Foreign Affairs, businessman Kavuya was cleared to fly his son Brian Kavuya and daughter-in-law Kara Tanya Komuhangi to Nairobi. 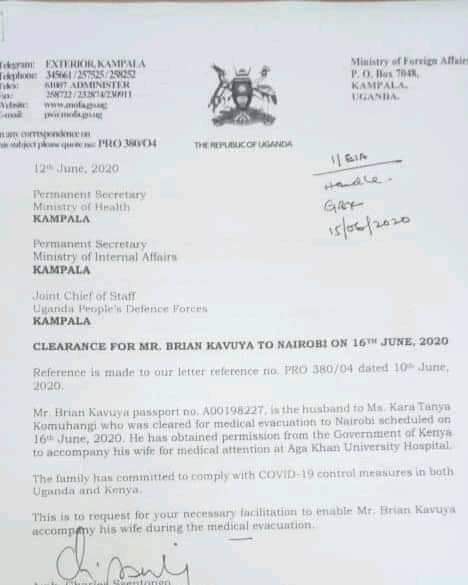 “Mr Brian Kavuya Passport Number AOo198227 is the husband to Ms Kara Tanya Komuhangi who was cleared for medical evacuation to Nairobi scheduled on 16th June 2028. He has obtained permission from the Government of Kenya to accompany his wife for medical attention at the Aga Khan University Hospital,”reads the letter.

Mr Kavuya was first in the eye of the storm after his wife,son and grandson were dubiously allowed to be exclusively jetted in from the United States of America.

A private citizen has since taken him to court over flouting restrictions meant to stop the spread of the Covid-19 pandemic.