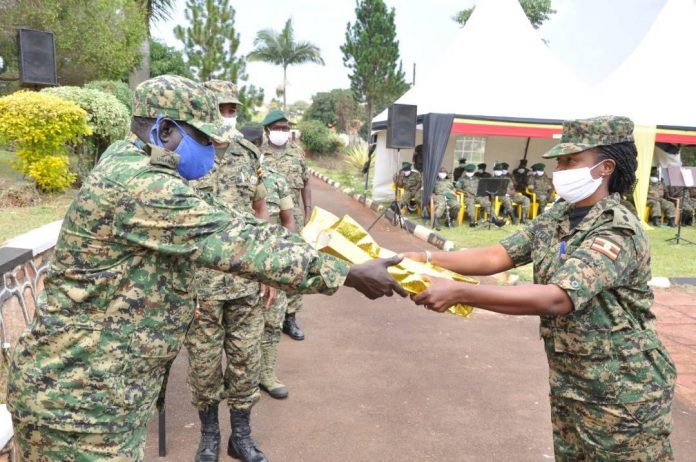 The Commander Land Forces (CLF), Lt Gen Peter Elwelu has presided over the pass out of 93 Company commanders, four of whom were female Officers.

The graduation of the Officers who had completed six months of intensive training on commanding a company strength force was held at Junior Command and Staff College grounds in Gadaffi barrack, Jinja district.

The CLF congratulated the graduates and told them that the course they had just completed bridges their previous and future career progression.

“After company commanders course, you should be able to foresee your future in the military because the course is a critical intermediary course in military career.” Lt Gen Elwelu said.

He added that how well a person grasps the course and the extent to which he or she puts to practice the fighting skills attained in the course will greatly determine how the superiors will identify him or her for senior level progression.

However, the commander noted that the application of military science must be accompanied by good leadership and moral attributes such as honesty, humility, obedience and hard work.

“Once you apply your military science and add on these leadership attributes, you will attain what you are meant to be. You do not need to seek any favors or soliciting for deployments to reach where you are meant to be,” said Land Forces Commander.

He counselled that no matter where someone is placed without the requisite skills and attributes, that person will stagnate.

The CLF observed that soldiering is a calling from God and that there are no shortcuts to the top.

“Your service in the Military is not by accident but a calling from God; you were meant to be what you are even before you were born, therefore, serve diligently. That is how your seniors made it to where they are, not by shortcuts” he said.

The CLF concluded his remarks with a creation of awareness about COVID-19 virus saying that it’s real and so they as well as their subordinates must follow all the precautionary measures for the good of the nation and themselves.

General Elwelu said that the army is a pillar of a country and should the virus affect it, the whole country will be affected and therefore the officers should take caution.