KAMPALA – Businessman Mohammed Allibhai has blasted the Parliamentary Committee on Commissions, Statutory Authorities and State Enterprises on notice over defamatory remarks depicting him as a criminal.

Mr. Allibhai, a Ugandan businessman, through his lawyers of Ambrose Tebyasa & Company Advocates, wants Cosase to discontinue the investigations arguing that they openly contravene the law.
Mr Allibhai, in a June 19 letter asserts that stories published in local media on June 16 over allegations of failing to appear before the committee was aimed at tarnishing his name, instigated by opponents.

The letter adds that the lawyers have on behalf of their client taken note of deliberate and sustained campaign that is “riddled with publishing false, malicious and defamatory articles” against Mr Allibhai.
In a letter to Cosase chairman Mr Kasozi the lawyers say that on 18th March 2020, they wrote to the Honourable Speaker of parliament and a copy of the letter on Cosase vide our reference No, AT/MAL/09/2020 reacting to a Newspaper report that parliament was investigating their client in respect of some properties that had been subject of court proceedings.

They add that another letter to Cosase dated 13 March 2020 raised serious issues as to the legitimacy of the investigations in view of the fact that the matters under investigation were a subject of court proceedings and within the exclusive mandate of the courts of law of the country.

“It was further highlighted that the intended investigations had the effect of being contemptuous and subjudice to various court processes and ultra vires of the powers of Cosase and parliament generally,” the lawyers wrote.
“Our client has obtained credible evidence that he has variously been depicted as a criminal by the committee within and outside Uganda even before any investigations have been made which casts doubt on the impartiality, credibility and transparency of the committee,” reads the letter written to Cosase dated June 19.

“The allegations that our client is hiding are not only unfortunate but extremely unfounded, a legally represented person who continually communicates to you can’t be hiding. As you are aware, Ugandan borders are closed and so are many borders for other countries due to Covid 19 pandemic. Our client is in the age bracket of the most vulnerable to the pandemic and can only make conscious movements taking into account of his health,” adds the letter in part copy of which PML has seen.

The lawyers add that their client would never object to appearing before an impartial body as he has appeared before it at least and that this negates the issuance of a warrant of arrest against him before serving a person, and without serving him as per the mandatory procedures that govern the parliamentary hearings under the relevant Act. 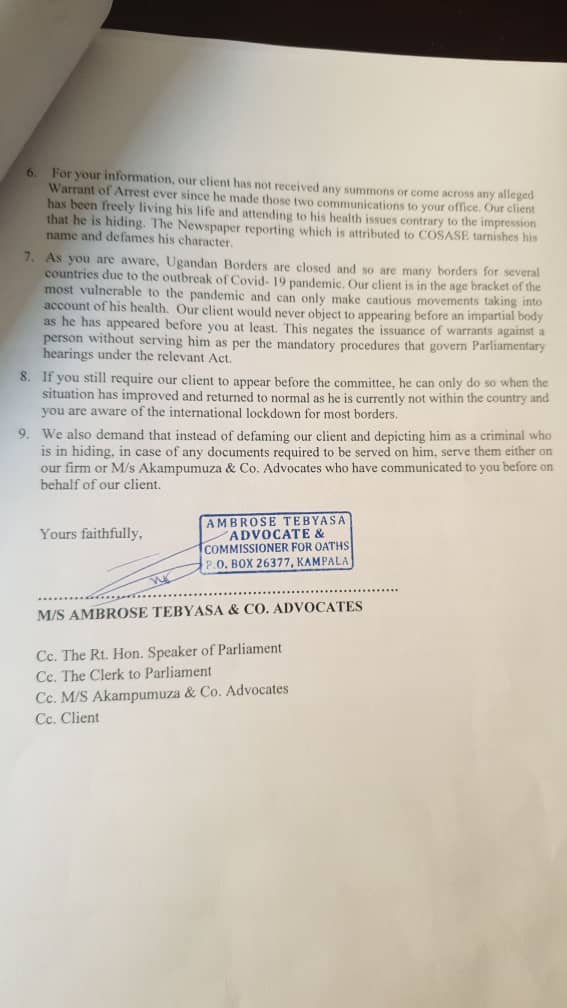 They have advised that if Cosase still require their client to appear before the committee, he can only do so when the situation has improved and returned to normal as he is currently not within the country due to the international lockdown for most borders.

“We are also demanding that instead of defaming our client and depicting him as a criminal who is in hiding, in case of any documents required to be served on him, serve them either on our firm or on M/S Akampumuza & Co advocates who have communicated to you before,” the letter adds in part.
Mr Allibhai last appeared before the MPs on September 11, 2019, in his capacity as Chairman of the Association of Expropriated Properties Owners Limited where he indicated that he was managing more properties on behalf and on instructions of the original proprietors who are in Canada and Europe.

He told MPs that after returning to Uganda in 1991, he was three years later given powers of attorney by owners to help in the repossession process because they were scattered in Canada and the United Kingdom.
He denies any foul play in the process.

Betrayal in the city! How Lumbuye was netted.

Violence in schools leads to $11 trillion loss in lifetime earnings