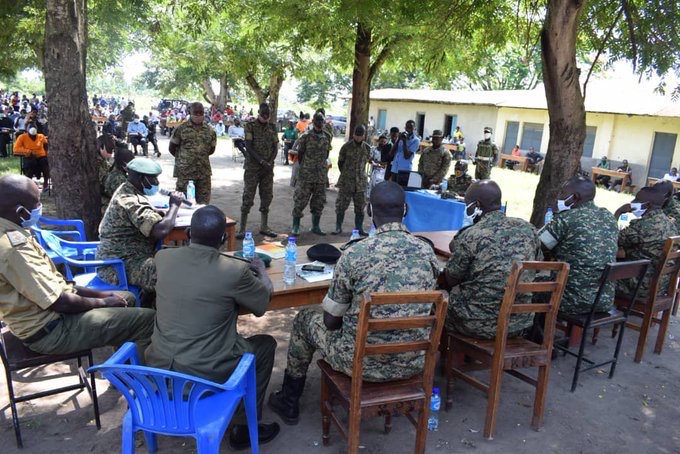 The Kasese general court martial has charged four Uganda peoples defence forces (UPDF) officers implicated in the gun down of Benon Nsimenta.
Benon Nsimenta, a lay reader at Kogere Archdeaconry, South Rwenzori was shot dead at Hima village on Wednesday morning as he rode his wife to the garden. Yesterday during Sunday service, Archbishop Stephen Kazimba Mugalu said the deceased was set to be ordained as a reverend.
Appearing before Lt. Col. Felix Nyero, Lt. Talent Akampurira who was the commander of operation, Pte. Jackson Nyero, Pte. Joel Otim and Abraham Lokwap were leveled with murder charges contrary to section 188 and 189 of the Penal Code Act.
According to the charge sheet, the four on June 24, 2020 while at Kikura cell, Kasese district the quartet, with malice aforethought unlawfully caused the death of Benon Nsimenta by shooting.
Nsimenta became the eighth victim to lose his life at the hands of security agencies implementing COVID-19 guidelines over the last 95 days. All the victims were either shot dead or tortured to death by soldiers, police officers or Local Defense Unit officers.