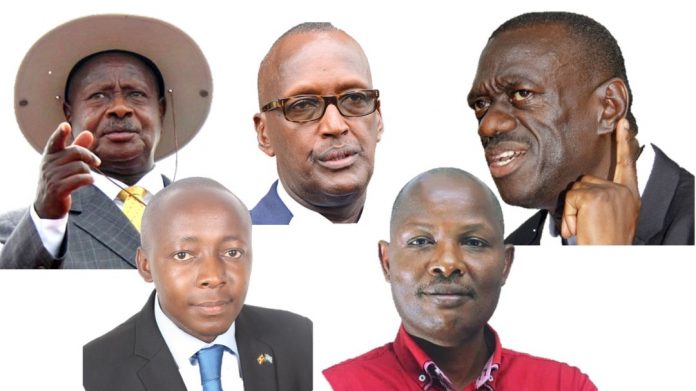 As the clock slowly ticks away to the 2021 polls, the battle for the presidency is shaping up between Rukungiri and Kiruhura, with President Museveni set to be given a run for his money by two of his former trusted allies.

Even before nominations are opened up, six politicians from Rukungiri have already indicated that they will be challenging President Museveni for the country’s Number One office in next year’s presidential elections.
Lt. Gen.(rtd) Henry Tumukunde’s campaign is already up and running while Col. (rtd) Kizza Besigye is being courted by his party, the Forum for Democratic Change(FDC), to have a shot at the presidency for the fifth time.

Col. Besigye has been coy about his plans for 2021 but, as was the case in 2016, he is known to keep his cards close to his chest and spring a surprise against his political rivals.
Mr Charles Rwomushana, the former Director of Political Intelligence at State House, has also written to the Electoral Commission indicating that he intends to start consultations about running for the presidency.

With Gen Tumukunde, Col Besigye, Rwomushana, Byamugisha, Kyomukama and Kamusiime, that means Rukungiri will be fronting four candidates against President Museveni in next year’s election.
Rukungiri is a crucial area in Uganda’s politics as its sons played a crucial role in the 1981-86 Bush War that brought this government to power.

Rukungiri businessmen financially supported the NRA rebels and some fighters have since admitted that the war would have been an uphill task without the logistical support of Rukungiri.
Businessman Garuga Musinguzi and others like John Nsheka, John Kyamatuuku, Salongo Nkumanya, Stephen Tukahirwa, Obadia Muheru, Stephen Banyenzaki and Charles Banya were the financial backers of the NRA war.
Suffice to note that on the night before the February 6th 1981 attack on Kabamba barracks, NRA rebels led by Mr Museveni met at Mathew Rukikaire’s house in Makindye, another critical contribution from the son of Rukungiri.

Rukungiri also contributed fierce fighters like the late Aronda Nyakairima,Col Kizza Besigye,Maj Gen Jim Muhwezi and Lt Gen Henry Tumukunde.
As a member of the Nairobi-based NRA External Wing, Former Prime Minister Amama Mbabazi was also very critical in mobilising resources to bolster the fighting forces.
However, most of those who contributed to the Bush War have since broken ranks with President Museveni, accusing him of betraying the ideals that inspired the war.

Col Besigye, Lt Gen Tumukunde, Mr Mbabazi, Mr Rukikaire and tycoon Garuga all do not look eye to eye with Gen Museveni and desperately want him out of the presidency.
In next year’s election, Mr Museveni will face the full wrath of the people of Rukungiri.
In the 2018 by-elections for the Rukungiri Woman MP, Mr Museveni got a sneak peek of what awaits him in 2021.
Mr Museveni was so desperate to win the election that he poured over Shs 2b into disparate groups in the district, as a sweetener for them to vote for the NRM candidate-Mrs Winnie Matsiko.
Mr Museveni and Mrs Matsiko were, however, humiliated as FDC’s Betty Muzanira polled 50,611 votes against Matsiko’s 46,379 votes.

That loss was particularly painful to Mr Museveni as he had camped in Rukungiri for days in a frantic attempt to humiliate Dr Besigye in his own backyard.
In next year’s elections, Mr Museveni will face the unfamiliar challenge of Lt Gen Tumukunde.
Lt Gen Tumukunde comes with the advantage of understanding the system inside out, having been the oil that run the NRM machinery in the 2016 elections.

That explains why Mr Museveni panicked when Lt Gen Tumukunde declared that he would be running for the presidency and arrested him.
In Col Besigye, Mr Museveni will face a seasoned opposition politician whose national appeal is guaranteed.